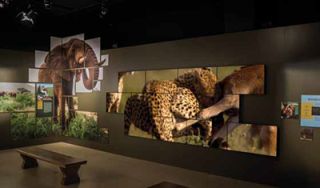 The videowall consists of a 12-panel (4x3) array of Planar Clarity Matrix MX46HD LCD videowall displays, and is unusual in that its three horizontal rows are offset from each other.For more than a century one could explore the world and all that’s in it through National Geographic Magazine. In recent years that’s also been possible through programming on the National Geographic Channel, on the society’s engaging and constantly evolving website, and recently on an interactive, tablet-based version of the magazine.

This year marked continuation of this rich tradition—and the ongoing embrace of technology—with the opening of an exhibit in the National Geographic Museum in Washington, D.C. The exhibit pays unique tribute to the 125 years of work by the society’s explorers, photographers, and scientists while also looking forward to the future of the society. It presents a larger-than-life picture of the many facets of our world on an LCD video wall whose physical layout provides a novel and engaging platform that maximizes the impact of the National Geographic Society’s renowned visual content.

The video wall consists of a 12-panel (4x3) array of Planar Clarity Matrix MX 46HD LCD video wall displays fed by 12 BrightSign XD1030 digital signage players. It was installed by Sterling, VA-based Avitecture, which designs, installs, and supports integrated audiovisual systems with an emphasis on dynamic architectural displays. The video wall is unusual in that its three horizontal rows are offset from each other—a unique layout that creates an engaging experience.

“Our creative team envisioned the offset layout as a way to present nature in a more organic format,” said Thomas Oelberger, one of the museum’s exhibit designers. “Rather than depicting the natural world in a rectilinear box, our layout allows for compelling compositions that highlight and accentuate the lyrical beauty of each scene. It was tremendous to be able to work with such a highly engineered system such as Clarity Matrix—it certainly encouraged our creativity.”

Oelberger calls the system highly flexible as well, owing to features such as its quad controller processors. “The built-in configuration tools allow us switch between inputs and wall layouts very easily. For the 125th anniversary exhibit we currently output full HD to all 12 panels. But if we need to use the display for a special event we can stretch a single input over the entire video wall with minimal effort.”

Clarity Matrix earned particularly high marks for its off-board electronics design; a unique feature that allows components such as controllers and power supplies to be housed away from the video wall in a remote rack room outfitted with a Middle Atlantic WRK-24MDK and two APC Smart UPS X2000VAs. “This design keeps the video wall from heating up, which minimizes cooling of the exhibit space,” said Bill Apter, special projects consultant for Avitecture. “It also facilitates convenient troubleshooting at the AV rack, without having to disrupt the visitors in the exhibit space.

The Clarity Matrix video wall features Planar’s EasyAxis Mounting System, which has proven beneficial in several ways. “Because of the offset nature of our installation, accurate placement was exceedingly important. Planar’s EasyAxis Mounting System greatly simplified the installation and ensured our content looked exactly as we imagined,” Oelberger said.