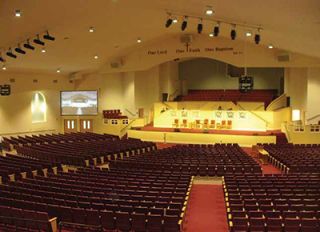 Lou Jones, president of NB S Media Systems in Charleston, South Carolina, has been working with the members of Mt. Moriah Baptist Church for over 20 years.

Three Danley SH-96 HO full-range boxes provide main coverage in an exploded LCR arrangement, a pair of Danley SH-95-HOs provide delay on both sides, and two more SH-95 HOs deliver down-fill for the choir.He helped to design and install their previous three sound systems, each a response to the church’s continued growth. Recently, Mt. Moriah expanded yet again, building a new 2,250-seat sanctuary on its property. Again, Jones and his company helped the church meet all of its audiovisual needs. He arranged a sound reinforcement system shootout, pitting three well-regarded line array systems against a Danley Sound Labs point source system. Danley came out on top sonically and, as a bonus, was the least expensive system under consideration. The church used some of the money it saved to add a few extra Danley boxes, which absolutely guaranteed clear, high SPLs required for the full impact of its energetic gospel services.

“They wanted to be absolutely certain that they would have a sound system capable of delivering high-end, concert-quality SPL and low-frequency output for their full production, which includes a 150-voice choir, drums, bass, guitar, sax, keyboards, B3, and soloists,” said Jones. “And they wanted to be rider-ready for touring Christian acts.” It was destined to be an impressive sound system, and the church wanted to be sure it would get the best components available. At the request of the church officials, Jones arranged a loudspeaker/subwoofer shootout, sequentially bringing in four well-respected manufacturers, including Danley Sound Labs.

Except for Danley, the other three systems were all line arrays, consistent with the size and format of the room. All of the systems sounded good, but the church’s task was to pick the best. “They were impressed by the Danley system,” said Jones. “They liked its warm, hi-fi quality. The subs were also tremendous and more than capable of putting out the kind of solid low end that they were hoping for. They had the money in the bank for even the most expensive of the four systems, so their decision was based purely on performance. Nevertheless, the Danley system would save them some money. In addition, the Danley point-source system affords them better sight lines than they would have had with a line array.”

Engineers at Danley Sound Labs assisted Jones with a system model. Three Danley SH-96 HO full-range boxes provide main coverage in an exploded LCR arrangement. The new “HO ” suffix on many of Danley’s full-range loudspeakers denotes a new high-frequency element that allows the entire box to operate at higher SPLs with Danley’s characteristic flat, undistorted response. A pair of Danley SH-95-HO s provide delay on both sides, and two more SH-95 HO s deliver down-fill for the choir. Two Danley SH-Micros serve as apron fills, and two SH-Minis fill in the dead zones on the Deacon and Deaconess boxes on the platform. Eight Danley SH-LPMs serve as stage monitors. A pair of flown Danley DBH -218 subwoofers convey ample low end from either side of the stage. The DBH -218 is Danley’s nuanced take on conventional subwoofer design.

NBS also designed and installed the HD video system for the project. This system includes two Vaddio HD-19 and one Vaddio HD-20 1080p remote PTZ camera (and they are adding a fourth), controlled by Vaddio’s joystick controller. Video processing and distribution is done using a Roland V1600HD video switcher. Camera inputs are all HD/SDI and outputs to projectors and flat-screens are DVI . There are five Digital Pro E-Vision 7,000 lumens/WUXGA DLP projectors. Two projectors are “stacked” per side to illuminate 16x10-foot VU Easy fixed screens on either side of the proscenium. The fifth E-Vision projector illuminates a Draper 137-inch 16:10 ratio screen above and in front of the choir seating position and behind the proscenium arch (not visible from the audience). Additional flat-screen monitors are located in various areas on the platform on rolling low-profile mounts so that the celebrants can see the video presentation. There are also flat-screens installed in the Pastor’s Study and conference room with numerous other locations in the building being “roughed-in” for the addition of future displays.

The theatrical lighting system was designed and installed, in partnership with NB S, by High Output with local offices in Charleston and headquartered in Boston, MA. Mark Shore from the Boston office was High Output’s lead engineer and designer on the project.