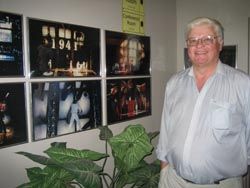 Staging Techniques' Randy Will at the New York office.
Staging Techniques started in the early 60's when a group of stagehands and creative directors began presenting projected shows using slide projectors partly customized from manufactured equipment and partly hand built. Those shows were controlled with manual fade units that were completely designed and built by Staging Techniques. The company was officially formed in 1963 and was sold five years later to a TV conglomerate. Two years later it was sold again to Will and three other technical/production men all of whom already worked for the company. With each succeeding year they developed new gear and broadened the business by working on operas, dance, and feature film premieres in addition to industrial work.

Will says," What's crucial about the way we work is our philosophy of the business. The disciplines of presenting shows are based on theater disciplines. The theater is a cooperative art, not an individual art, so everyone has to be mindful of the needs of everyone else. Needless to say, the business world doesn't work that way. We are show guys. We like to see a show run at speed, in order, and on cue. Sometimes it's simple, sometimes it's not. At the same time, the approaches to production vary from one discipline to another. Rock shows aren't managed the same as Broadway shows, which aren't managed the same as corporate meetings." That seems like an appropriate statement from the company responsible for Pink Floyd's original tour of "The Wall."

Staging Techniques' vertical market seems to crossover very often and the company enjoys taking on new challenges. Will continued, "We serve a market which is probably a little broader than those served by some of our colleagues. We look at shows as theater guys. Our professional approach to any project is perceived as it is because we were brought up in the theater and not in the AV industry. If we don't know how to handle a particular specialized area we have friends we can go ask for information or to hire to participate."

Recent history has definitely affected most businesses in the New York area. 9/11 was crippling to many companies, and the staging industry was no exception. Will said, "We have seen fewer really exciting projects since the World Trade Center attack. I think across the country others have been less affected by that. Growth has definitely been slow since 9/11, but we're very near the end of that problem."

Will believes that the industry succeeds when the combination of producers and stagers, work to engage the customer emotionally and let the customer interact with their technology. From the smallest shows to the multimillion dollar ones interactivity is key to a successful show. Will explained, "We're already beginning to hear from certain people on the leading edge saying that our communication must engage the customer emotionally. Well, the ancient Greeks knew that, Shakespeare knew that, but the fact that we're hearing it repeated today gives me encouragement because stuff that engages you needs to be delivered by people who understand production value. I think what will happen will be that there will be a certain group of people who will want something that grabs customers' attention seriously; that's not flash and trash, or just fast moving animation, or changing lights and colors. We intend to keep seeking out those people."

In addition to equipping and innovating, a large part of being a successful staging facility is holding on to quality people. Any staging house knows that technician turnover will always be, to one degree or another, an issue in the industry. Will believes that of all of the elements that make up the staging "product" the most important is the people. Will says, "Everyone complains about commoditization in the business. It drives pricing down leaving less for R&D and less to pay quality people what they're worth. In this trade your product is only as good as the cumulative knowledge of your people. An excellent crew is a huge asset. What commoditization means is that the gear is going out the door at prices set by the law of the jungle and so is the time and effort of the crew. What should not be going out the door for nothing is that collective human expertise. It's that expertise that makes you what you are and distinguishes you from your competitors."

Like any company in the industry Staging Techniques often finds itself short on certain types of gear at times but for a company with the experience of Staging Techniques this isn't a problem too often. Will points out, "For the kind of stuff we do, and the amount of it that we have to do in peak periods, we will always need sub rentals. In a lot of the companies on both coasts, there are a significant number of Staging Techniques alumni working for other people so Staging Techniques has many friends within easy reach. " In the business as a whole, we recognize that the person at the other end of the phone is our competitor today, our customer tomorrow, our colleague next month. So if we need something, we call someone we know, and see if he's got what we need available on our schedule. I find it's an extremely cooperative biz at the level we work at. And no matter how much gear you have from time to time you always need help from your friends."

To maintain the highest customer service level and to prevent the need for too many sub rentals, Will's team is constantly purchasing gear that will help them do the most complex of shows. From lighting to large projectors, Staging Techniques, like anyone else, tries to invest the money where it makes the most sense. "We have a long term plan and everyday we look and see how close we are. Both in equipment investment and operating strategy, as responsible business people we have to forecast and plan ahead, but when we do that we have to keep a tremendously sensitive sense of humor because most of the time the one scenario we ultimately have to deal with is the one we didn't count on. And among the departments we have to figure out where our company should invest the money as opposed to where we can let someone else do it. We make a lot of those decisions intuitively."

Staging Techniques has expanded across the country over the last 25 years. With branches in Seattle, Hollywood, and Atlanta, the company has planted roots throughout the country to take on whatever comes its way. With clients as big as Microsoft and IBM, it is definitely in Staging Techniques' favor to have such diverse locations. "We've always done all parts of a show, we've never been anything but a one-stop-shop, and we've always been inter-disciplinary. Most of what we've done is business meetings, press events and other corporate presentations. But our work has also been seen in feature films, on Broadway, and on television. We have done birthday parties and we've done aircraft rollouts. But in terms of our approach, everything we do is custom, even the formula shows." For more information visit www.stagingtechniques.com.