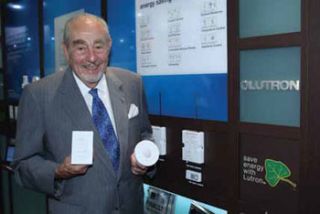 At the annual Electronics Lifestyles Awards Banquet at September’s CEDIA EXPO in Atlanta, GA, Lutron’s founder, Joel Spira was presented with the 2010 Lifetime Achievement Award in recognition for his contributions to the custom installation industry. The award recognizes an individual who has exhibited outstanding creative, innovative, and visionary leadership in the growth and advancement of the residential electronic systems industry.

Spira’s achievements span both the residential and commercial technology spaces, and his place in American history was commemorated earlier this year when Spira donated 12 artifacts from Lutron’s history to the Smithsonian National Museum of American History in Washington, DC. There they joined other artifacts in the museum’s Electricity Collection, including experimental lightbulbs from Thomas Edison. Throughout his illustrious career, Spira is credited with having 266 design patents and 226 utility patents.

While Lutron celebrates its 50th anniversary next year, Spira isn’t interested in looking back on where Lutron has been, but is more so in discussing what the future holds and what he hopes Lutron’s ultimate legacy would be—energy management.

Spira cites how much easier it is to save electricity than to build it, claiming it takes between $1.40 and $7.40 to build 1-watt of energy, whereas a dimmer saving 1-watt costs just $0.35. Lutron lighting control products reduce energy usage by an estimated 10 billion kilowatt hours, resulting in $1 billion utility savings annually. Additionally, Spira says that if every American household replaced just two regular light switches with dimmers, it would save an additional $1 billion in electricity costs and reduce 25 billion pounds of CO2 from going into the environment (the same as removing 1 million cars from the roads) and stop construction of three power plants per year.

“We have now developed a system for saving energy throughout the home for total home control,” Spira said, but lighting is only the third largest energy consumption device. By a combination of shading control—which can block light and heat in the summer and allow light to warm the space in the winter—thermostat control, occupancy detection, and plug-in device control, Lutron products are now able to address the number-one, HVAC, and numbertwo, appliance energy users.

By integrating with the astronomic timeclock functions in Lutron processors, the system can automatically raise and lower shades at different times of day, cut back heating and cooling systems, and cut power to major energy hogs like hot water heaters when they won’t be used.