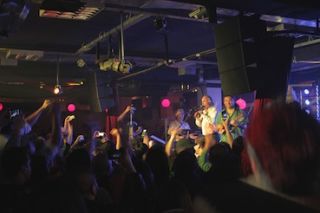 Just eight hundred square meters, with a capacity for eight hundred people, the club has recently celebrated its tenth anniversary. The celebrations called for a new PA system, and owner Sebastian Menichetti knew just who to contact.

"I had been hearing good things about Audiomusica, they had some German system everybody was talking about, d&b audiotechnik," Menichetti said. "I asked Erickson Cardona to come down and give me a demonstration."

"I saw straight away what the Subterraneo needed," said Erickson, head of technical and commercial support in Audiomusica. "The acoustic environment is actually not that bad, even with the low ceiling; it was just a matter of selecting the right tools: a small line array system with something less than 90 degrees dispersion, properly installed, would be ideal."

Erickson had one slightly pressing problem: "Sebastian's need was immediate; the anniversary was just days away. Fortunately we had a good selection from the d&b White range in stock and the 10AL cabinet with a seventy five degree horizontal dispersion angle and a good range between 110 Hz and 18 kHz was just the thing. Those ten inch drivers in such a small loudspeaker cabinet are a real surprise to everyone that hears them."