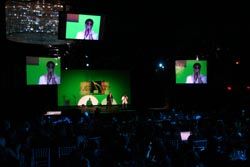 MB Productions provided Textaline screens that would allow the line arrays behind them to perform normally, without impeding the sound quality.
MB Productions was chosen to capture the event for future broadcast, as well as IMAG, and intercutting between Keynote and imbedded graphics. For each honoree, there would be a graphic piece to display, or sometimes an imbedded video for the honorees that couldn't attend. To accomplish this, MBP needed to hang two screens on either side of the stage. Brian Brooks, president of MBP, explained, "The venue itself has line arrays on both sides of the stage and it's not very wide. They wanted two screens on either side of the stage so the audience, which was at a sit down dinner at all levels, could all see the content. They also wanted the stage to be very clean because between the awards they'd have live performances. They also wanted the branding of the ASCAP logo in the middle." With nowhere else to appropriately hang the screens, MBP had to figure out how to hang the screens without impeding the sound. Brooks said, "This posed a problem because there was a line array right in the way, and a regular screen isn't audio transparent, so we had to figure something out because in front of the line arrays was the ideal place for the screens."

After experimenting with expensive screen materials, MBP decided to go to outside help to solve the screen issue. Brooks recalled, "We spoke with Rose Brand about the PVP based Textaline, something we'd tested before and had deemed to be very reflective and porous. So we cut it to spec and riveted in snaps to connect it to a custom 6 x 8 foot frame. Textilene has an ideal reflective quality to produce crisp projected images while being completely audio transparent. It truly proved to be the perfect low cost solution for this application."

A pair of flown Digital Projection 6000Dsx DLP Projectors were used to display a mix of live camera IMAG as well as graphics and video rolls that were embedded within Keynote and exhibited via a pair of Apple iMAC workstations. The show was captured via MBP's Sony D50 SDI 5 Camera Package that consisted of their Ross Synergy 1 Digital Production switcher, Sony TX7 Triax CCU shader rack and DV cam recording facilities. The cameras were configured as two handheld, a 18 foot Jib arm and one master wide shot while the show program and each camera was on a recorded on seven Sony DSR-1800 DV Cam recorders. In addition, MBP supplied the show producers with an ENG Crew that was equipped with pair of Sony DSR-570 DV Cam Camcorder to capture B-roll and interviews of celebrities that attended the pre-show. During the event these cameras recorded the awards and performances for archive purposes.

The screens worked out so well the theater has decided to keep them to test them on other events. Brooks explained, "It was the ideal solution to their problem. And the since there wasn't black borders on the screen the images seemed to float. It was a real cool and reflective look. So now I'm excited for the future because we have a solution for such a problem." For more information visit www.mbvideo.com.