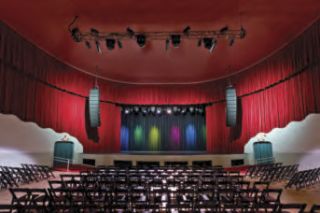 With the Ridglea’s seating capacity of 1,350, ASA Audio decided on nine NEXO GEO 1210s per side, one S1230 per side on the bottom, and six RS18s for subs.Opened in 1950, the historic Ridglea Theater in Fort Worth, TX is on the way to reliving its original glory as one of the city’s most treasured entertainment venues. Initially, it was a premier movie house, featuring classic films of decades passed. In the late ’90s, this legendary 20,000-square-foot jewel became known for hosting many locally and nationally acclaimed bands. Its 70-foot sandstone tower has been a long-standing iconic landmark for the west side of the Dallas-Fort Worth Metroplex.

In 2010, Jerry Shults, a Dallas-based entrepreneur and restoration specialist, bought the Ridglea Theater, saving it from demolition. Thanks to his tireless efforts, he has transformed the theater into a marvelous multipurpose center for the performing arts and events. It has been restored to its original beauty highlighting all of its unique Spanish Mediterranean elements. The lobby boasts a 2,100-squarefoot mural by the celebrated artist Eugene Gilboe, depicting Spanish Conquistadors arriving on the coast of California with pirates in close pursuit, a fitting subject for a venue intended to fuel the imaginations of its patrons. Shults’ meticulous restoration has resulted in the theater being listed in the National Register of Historic Places, ensuring its survival into the future.

Sound Productions of Irving, TX , provided the audio equipment as part of the system refurbishment completed by ASA Audio, also of Irving. Started in 1987 by owner Arthur Stephens, ASA Audio has expanded its operations to provide sound systems and lighting for private and corporate events, installations, arena shows, and festivals.

ASA recommended a NEXO GEO S12 line array system as the focal point for the sound system. “My first exposure to NEXO speakers was when I heard the Alpha System on tour around 2001,” said Stephens. “After hearing several other systems, I decided to go with it. The Alpha box was a nice fit for my company being that I could pair it down for any size event from clubs to larger venues.”

The Ridglea Theater has been a client of ASA Audio since Jerry Shults bought the theater in late 2010, Stephens explained. “I approached him about doing the installation of the sound system, and began our discussions about what kind of system he wanted. He mentioned that The Kessler Theater in Dallas was the best-sounding room he had heard. Coincidentally, we did the installation there using NEXO GEO S speakers, which was great because he had a good idea of the quality of the system, and from there we decided on line array.“

With a seating capacity of 1,350, the Ridglea is quite a bit larger than the Kessler, so ASA decided on nine NEXO GEO 1210s per side, one S1230 per side on the bottom, and six RS18s for subs. On stage, they installed 12 NEXO PS15 monitor wedges and one RS18 for the drum sub. NEXO NX4X4 amplifiers power the entire system. “The GEO 12 was the perfect fit for the room with such control that the room sounds virtually the same on the floor all the way back and into the balcony,” added Stephens. “It’s a beautiful setup and a dream to mix on.”

The Ridglea Theater plans to be an integral part of the performing arts community, both locally and nationally. It is an ideal venue for live music, dance, and drama, as well as events such as corporate functions, meetings, receptions, charity events, and film festivals. Local and national bands will continue to make their mark on this symbolic stage with acts that feature Americana, blues, alternative rock, big band, and more.