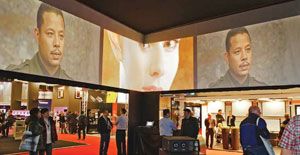 With the Next Generation of Visual Displays, it’s No Longer Hip to Be Square

If you want to know where you’re going, you’ve got to know where you’ve been— unless you’re talking about video. When it comes to visual displays, clients are finding that virtually no vision is too ambitious as far as 3D, curved video and domes, flexible screens, video tiles, and interactive displays are concerned.

As manufacturers become increasingly agile in their ability to respond to customer requests, AV integrators can expect both the learning curve and expectations associated with visual displays to increase steeply in the years to come. “Chances are, what’s next on the horizon will start with a customer taking a pen to a blank sheet of paper and saying ‘Can we do this?’” said Sean Langdon, director of business development for the interactive display solutions manufacturer Horizon Display. “We quickly bore at seeing what we’ve seen several times before. We tune it out. Since technology grows at an accelerating rate (Moore’s Law), we are afforded the opportunity to cost-effectively continue to refresh and upgrade visual experiences: Cost drops, old paradigms become obsolete, and innovation beats commoditization.”

Next-generation AV displays are being applied to executive briefing centers, retail showrooms, signage, as “digital wallpaper,” or in advanced forms of entertainment; the evolution taking place in the AV space is meeting market demands for interactivity and largescale visualization in both indoor and outdoor settings. “As these new visualization capabilities become available to the marketplace,” pointed out Rick Cope, president of display manufacturer NanoLumens, “these AV capabilities will drive the design and conceptualization of buildings and interior spaces. They will absolutely turn previously unimaginable spaces into very viable communications spaces—a whole new world of ‘installation sites’ will open up to the industry because the traditional limitations will have been overcome.”

Of course, there is also a practical side to the rapidly changing face of video. “An increased need to control costs is certainly a driving force behind display innovation,” added Chuck Collins, vice president of sales at Digital Projection. “That can manifest as a need to use less expensive, more efficient illumination devices, that in turn will keep total cost of ownership down by producing brighter, longer lived lamps or LED light sources that never need to be replaced.”

And, as George Tsintzouras, senior director of product management and business products, for Christie Digital pointed out, newer technology continually replaces older technology as a natural course: Where things get interesting is when newer technologies augment and add value to displays, ultimately creating new applications.

“For example, interactivity and the worldwide push for collaborative visual solutions have created an exciting new market segment that has come alongside the existing pro AV display business,” Tsintzouras said. “The numerous ways one can interact with a display today, and people’s general expectation to be able to interact with their images, documents, and content, has created new applications, installation challenges, and opportunities for AV integrators.”

For the contractors charged with designing and installing these advancing visual display systems, the result is an intensifying juggling act between systems and space. “There are three key considerations,” explained Dana Corey, vice president of global sales for the large format display manufacturer Prysm. “First is making sure that displays deliver extremely high quality in a large format. Second is adapting to the space: For example, we combat ambient light by making the display brighter. Finally comes the question, ‘How do we deliver this experience and not change the infrastructure of the space?’ In other words, how do we install this system without dropping in a lot of power, or changing the HV AC system? That’s part of considering the cost of ownership behind the system.

“Those needs—for a high-resolution display and economical infrastructure—weren’t always aligned,” Corey continued. “But now those tradeoffs aren’t necessary. You can please the users with a great viewing experience, but also make the infrastructure people happy too. That’s the balance: keep it big and bright, but with low power and low heat.”

As manufacturers grow more adept at managing this balance, and clients catch on, the result is a positive cycle where new visual display technologies are becoming available at an ever-quickening pace. “Digital Projection has found that simulation and visualization applications are certainly a catalyst for our own innovation,” said Collins. “Blending, warping, higher-resolution, color accuracy, anti-smear, and 3D capability are all features that are becoming standard in a large portion of our product line. Some of the technology didn’t even exist a few years ago, and now, rather than being an option, we are building these features into a large portion of our products. Simulation isn’t just for the military anymore—it touches nearly all of our commercial channels, and is even making headway in the home entertainment market as well.”

“The most exciting technologies are ones that focus on user experience,” emphasized Sean Langdon, Horizon Display.

At Christie Digital, George Tsintzouras noted that even as display technology continues to change, the company keeps its eye on the primary function of showing pixels, light, and content. “In surveying the technological breakthroughs that are happening today, we can see a future of low-cost, high-brightness display options that are driven by laser and LED technology becoming commonplace. One of the more exciting technological shifts that Christie has been involved in is the concept of ‘canvases of light.’ From projection mapping on large buildings to the use of Christie MicroTiles to create compelling shapes and displays using small, scalable display ‘building blocks,’ we are no longer confined to fixed display aspect ratios. The imagination of AV integrators and architects is all that limits how these products and technologies can be used.”

Two recent examples from Christie include a MicroTiles installation at the London Stock Exchange, and the use of Christie projectors in the recent world’s largest projection mapping project: Alfa-Bank in Russia used 15 Christie Roadie HD+30K and 66 Christie Roadster S+20K projectors to produce over 1.8 million lumens on the face of the Moscow State University.

“The most exciting technologies are ones that focus on user experience,” Horizon Display’s Langdon asserted. “If content is king, user experience is the emperor. Anything that makes the user more powerful is exciting. Through advancements, we can do new things in AV that weren’t possible before. For example, we worked with Cisco, Verizon, and Duke Energy to wire the city of Charlotte to our kiosk and give the entire city their real-time and historical total power usage, all over 4G and in every lobby of every major downtown building. Try doing that a few years ago.”

Likewise, Prysm’s Laser Phosphor Display (LPD) technology is central to a powerfully visual user experience at Time Warner Cable’s Staten Island, NY , retail store. Working with dynamic environment creator Show+Tell, Prysm’s displays made a captivating 16.6-foot x 6.25-foot “wow wall.” “People come in and they connect Time Warner with technology,” said Corey. “The evolution is also on the content side. We can enable a space, but Show+Tell has to design something around the messaging and brand of Time Warner.”

The expanding possibilities, however, don’t necessarily come with a commensurate increase in complexity of integration. NanonLumens’ Rick Cope pointed to a recently installed display into a high-end New York City cosmetics store as an example. “The retailer was struggling with the most effective way to create a large, engaging image next to a window that created high ambient light, and was also directly adjacent to stations where makeup artists work,” he said. “NanoLumens designed a nine-foot high by five-foot wide display that is only two inches thick, generates no heat, makes no noise, and runs off a 110V outlet. This display has enough brightness and contrast to be amazingly eye-catching during high noon, evening, or nighttime operations.

“Because of our display’s design, we arrived on-site and installed the entire display in less than 30 minutes. The entire installation process was comprised of plugging the display into the outlet and connecting the Cat-5 cable.”

Warping and edge blending are becoming the norm in projectors, and their applications can be expected to increase as the technology becomes more accessible. “There is already a rise in nonstandard screen aspect ratios being sold by screen manufacturers, indicating this trend is already taking hold,” Tsintzouras said. “Another growing trend that will increase the need for blended displays in mainstream pro AV is the need to display more data, multiple sources, and multiple formats simultaneously. As we strive to collaborate better and share information, there is a need to have multiple sources and a mix of content shown at the same time in order to make critical decisions.

“With respect to curved screen displays, outside of the technical benefits for using curved displays, there is something inherently cool and exciting when you stand in front of such a display. Technologies like Christie AutoStack and Christie Twist help to make this type of installation easier for the AV integrator to deploy and maintain, so naturally we expect to see more in the future.”

“Most of our applications are about the immersive experience,” added Prysm’s Corey. “The challenge that presents to typical displays, whether front or rear projectors, is off-axis issues, and that the display looks the same no matter where you are. We stress uniformity. Imagine being in a 180-degree room: the must is that is looks the same no matter where you stand. It can only be immersive if the user doesn’t feel or see the technology.”

No End In Sight

With cookie-cutter visual display applications looking like an endangered species, assembly lines for the technology may not be far behind. “We believe that the age of complete customization is upon us,” predicted Rick Cope of NanoLumens. “We call it ‘EO Q1’: It means Economic Order Quantity of One. We take this very, very seriously. NanoLumens is implementing a manufacturing process in which displays are designed and manufactured that meet precisely the size, shape, thickness, efficiency, and resolution requirements of each individual customer.”

While all this great news for the customer and their end user/experiencers may mean more potential projects for integrators, it may also means they’ll have to work faster than ever to keep up. “As advanced displays evolve, the integrator has to evolve along with it,” Prysm’s Dana Corey concluded. “The strong will survive, and as our display options continue to grow, they have to pull the pieces together.”