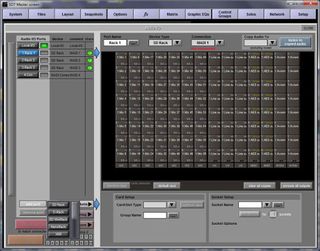 V685 software
V685 includes:
- Increased Buss count for the SD9 from 16 to 24 Flexi Busses
- SD11i/B input channel count increased from 32 to 40 Flexi Channels
- Support for Optocore DD4MR, DD2FR, X6R and DD32R devices in audio I/O
- Any SD5, SD8, SD9, SD10 and SD11 running Waves 9.5 will now have 32
stereo Waves racks
- The availability of Aux Sends on Groups in the live and theatre versions
- Support for the D-Rack AES input card and the addition of the D2 Rack as an I/O device

For theatrical environments, the Relative Faders in Cue Groups is now a Macro command; Auxes, Groups and Matrix channels can now be added to channel sets; and Channel Cues now defaults to showing names.

And for broadcast applications, Backstop PFL is now functional on output busses, plus there is a new option on the SD7B and SD10B for Speaker Mute to do Dim.

"Waves is happy to provide the increasing number of DiGiCo SoundGrid MultiRack users the added benefit of doubling their rack capacity," comments Mick Olesh, Waves EVP Sales and Marketing. "Increasing the number of racks provides DiGiCo SoundGrid users the capability of running 32 racks of Waves and third party plugins to their workflow."