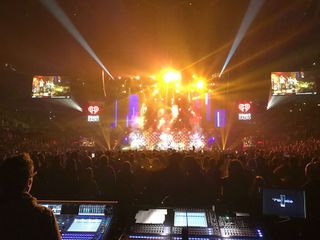 Equipped by Firehouse Productions, iHeartRadio’s 2016 Jingle Ball Tour brought many top pop acts performing on DiGiCo desks and L-Acoustics arrays to 12 US cities
Although the music and artists vary each night, the sound is singularly sensational with all of the shows and artists performing through DiGiCo consoles feeding L-Acoustics K1/K2 arrays. Equipped as it has been in the past by New York/Las Vegas-based Firehouse Productions, the Jingle Ball Tour’s sound reinforcement vendor, front-of-house sound is utilizing two DiGiCo SD10 consoles with monitors handled by a pair of DiGiCo SD7 desks.

“Most of the artists performing on this year’s Jingle Ball Tour carry DiGiCo consoles with them on their own tours, so it made perfect sense to supply SD7s and SD10s for this tour,” said Jamie Pollock, Firehouse Systems Tech, who accompanied the Jingle Ball Tour on its recent San Jose stop. “Engineers like them because of their sound, flexibility and integration with Waves plug-ins, and because they can easily transfer the setups from their own DiGiCo consoles to these for this tour.”