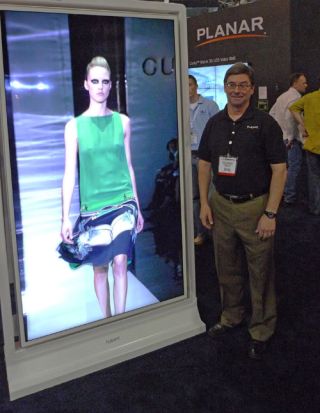 “With the Planar UltraLux Series, customers finally have the eye-catching scale and configurations needed to create truly immersive digital signage experiences that capture the imagination of consumers and, ultimately, build brands,” said Jennifer Davis, vice president of marketing for Planar Systems. “The range of screen sizes, touch interactivity, and design flexibility are unprecedented. And the strong early market reaction to Planar UltraLux is an indication that this type of design is an important performance criteria for buyers of digital signage displays.”

The zero-bezel, all-glass design, extends to the edge of the display, similar to popular smart phones and tablets. Planar UltraLux displays are available with white or black edge trim color options.

The profile of the Planar UltraLux displays when wall mounted is less than 3 inches, which meets Americans with Disabilities Act (ADA) accessibility guidelines in buildings and facilities.

The UltraLux Mounting System incorporates a kickstand feature that tilts the display away from the wall for easy access to the electronics. With edge-lit LED technology, the Planar UltraLux Series delivers reduced power consumption by up to 60 percent compared to CCFL technology. The series features a redundant power supply design, helping to ensure uninterrupted operation. Each Planar UltraLux display comes with Planar’s Extended Ruggedness and Optics (ERO) protection glass.

Planar UltraLux displays include a full serial and network command set for automated notification and control and also supports SNMP for integration with enterprise management systems. They are available with optional six-point multi-touch for interactive
applications, and incorporate a media player storage compartment.