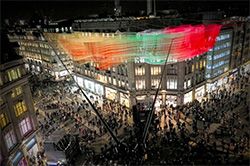 Lumiere London
Produced by Artichoke, Lumiere London was the biggest light festival ever held in the city; an estimated one million people came to the free outdoor event. Working with a large team headed by Unusual Services, QED Productions provided all the video projection equipment and services for the installations.

QED opted to use d3 4x4pro media servers for Janet Echelman’s stunning fiber sculpture entitled, “1.8.” Soaring 180 feet above the ground between buildings at bustling Oxford Circus, the sculpture was named “1.8” to represent the 1.8 millionths of a second – by which the day was shortened when the devastating Japanese earthquake tsunami hit in 2011. The artwork was inspired by data sets of the tsunami wave heights and represents the interconnectedness of all elements. It came to life over Oxford Circus when the public, using smartphones, interactively chose the colors and patterns of projected light.

QED chose six Christie 10,000-lumen projectors and d3’s 4U v.2.5 server system for “195 Piccadilly,” the installation by creative studio NOVAK. The large-scale projection mapping on the façade of the BAFTA (the British Academy of Film & Television Arts) headquarters explored different genres of film and TV using their photography archive. The animation’s aesthetic referenced the building’s origins as the home of the Royal Society of Watercolour Painters.