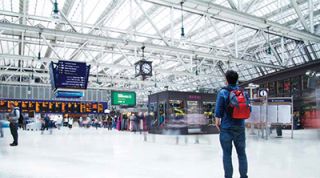 At the Glasgow Central train station in Scotland, Tannoy QFlex speakers utilize beam steering technology to ensure direct sound.Speech intelligibility has been pushed to the fore over recent years, not only as a result of the events of 9/11 and other subsequent tragedies, but also a more widespread understanding that excessive noise levels and incoherent sound can be unhealthy. In short, improved intelligibility and controlled noise levels can effectively save lives.

“It’s nice to see this renaissance of increased expectation of sound quality,” said Amanda Roe, global public relations manager and research manager at Biamp Systems, “because intelligibility falls right into that. It’s not just the advantage of being able to hear music like it was intended to be heard, but it’s also the fact that, if you are on a teleconference call, or walk through an airport or a train station and a page is announced, you can hear what is being said, clearly and concisely.”

Delivering intelligible speech is now inextricably tied to emergency communication systems. In the U.S., with UL 2752, and in Europe, with EN 54, voice communication is an integral part of mass notification system (MNS) standards. Biamp’s research in the U.K. in 2011 discovered that 35 percent of respondents believed that instructions delivered by an audio voiceover system would make them feel calmer in an emergency.

One useful side effect of the methods by which intelligible speech may be more reliably delivered, such as acoustic treatment of excessively reverberant spaces, can be a reduction in overall noise levels. U.K. sound expert Julian Treasure (with whom Biamp is about to launch a project) has quoted 2009 findings that noise levels in healthcare facilities have doubled since 1972, and is demonstrably detrimental to patient recovery. In the classroom, he also reported, it has been found that excessive noise and low speech intelligibility—the two often go handin- hand—result not only in learning difficulties among students but may present an increased risk to teachers of noise-induced heart attacks.

“Pure speech intelligibility in public spaces is definitely the exception,” commented Graham Hendry, vice president of application engineering and technology at TC Group International. “It’s very rare to be able to understand an announcement anywhere without having to strain your ears.”

There is often a misconception among consultants, designers, and architects, he observed, that if the music sounds good then so will the speech. Yet the basic science has been known since the last century. “If you’re a contractor or a consultant who has invested significant resources into learning audio and acoustics you should go one step further and learn how to market speech intelligibility as a product. The guys that don’t are going to be left behind; it’s definitely better for business.

“You can’t buy it on eBay or from a catalog. Lots of people think they can put a DSP on and fix anything; that’s not the case,” Hendry said.

Integrators and consultants are beginning to understand that clients are now better educated regarding intelligibility, said TJ Adams, product manager of paging products at Biamp Systems. “Those integrators and consultants are now a little more accountable to deliver a system that truly is intelligible. That starts with room acoustics and moves all the way through the system design, and ultimately to the listener’s ears.”

One of the modern, high-tech conference rooms that Biamp Systems was installed in at the Ina Schaeffler facility in Germany.But while the newer mass notification standards incorporate a voice component, Adams noted, “UL 2572 is really tailored more towards fire alarm vendors and not so much towards AV manufacturers.” As a result, few, if any, audio manufacturers have developed compliant equipment.

That said, manufacturers are certainly developing products that offer improved speech intelligibility. Biamp, for example, recently launched its Tesira platform. “That product has smart algorithms within it that sense human speech and react accordingly,” Adams said.

Intelligibility is not only dependent on acoustics, he pointed out. “It can also be because of poor system performance; for instance, gating microphones too slowly or too soon, or based on erroneous sounds.”

“Intelligibility is important, but it’s a lot easier to achieve through professional audio products than it is with fire alarm squawkers,” commented Steve Seable, DSP and amplifier product manager at Yamaha Commercial Audio. But with regard to the new MNS standards, he added, “I think there’s probably reluctance on the manufacturers’ part to build gear to a code that’s not completely sorted and widely implemented yet.”

At the most basic level of technology, Seable continued, “It’s essential that you have a foolproof way to interrupt whatever is happening and replace it with the emergency signal.” That is already possible with Yamaha’s TXn amplifier, he noted, which, while not compliant with MNS standards, has an analog input that can override the digital input: “If you tied the fire alarm into that it would replace the PA with a fire alarm or mass notification system.”

The space itself has a major influence on speech intelligibility, of course. Another factor is also often overlooked, Adams commented. “Generally, to have higher intelligibility means that you have to put more speakers in a space. Digital signal processing is not the largest piece of a budget typically; it’s usually speakers and acoustic treatment.”

He added, “We do a lot of training with architects, in teaching them about good audio design from the get-go. Architects are becoming more informed, and the integrators and consultants are getting more involved at an earlier stage in building design.”

For its part, Tannoy supports enhanced speech intelligibility via its QFlex speaker products, said Hendry, which utilize beam steering technology. “It’s all about getting direct sound rather than reverberant sound to your ear. It’s much less invasive than having speakers everywhere; if you can keep sound from bouncing off the floor and the ceiling then you don’t need lots of loudspeakers.”

Going forward, convergence will likely come into play, said Hendry. “Up until now the emergency system and the background music system have been two different things. Converging these two effectively is the Holy Grail; I think we’re moving towards that.”

“The problem of intelligibility has more to do with the loudspeakers and their placement. Typically a cone or steerable line array gives better numbers. In the past sound system designers had to worry about level/frequency response. With today’s demand, systems must also be intelligible. Designers must concentrate on SPL, frequency response, and coherence in the system. This is typically measured with an STI meter and achieved using high signal to noise ratio devices like steerable column loudspeakers.”
—Josh Evans, Technical Manager, AET Group at TC Group

“Controlling the source content is an important first step in enhancing intelligibility within a system. For example, compression on a live announcement microphone helps accommodate the attributes and techniques of different individuals. Pre-recorded messages may be used to provide additional control over the quality of messaging and free up staff to focus on other responsibilities. Scalable networked DSP systems afford systems designers very fine control over when and where specific content gets delivered. Message delivery can be highly localized, prioritized over other content, and even stored for later delivery to currently busy areas. Managing when and where content is delivered is as important to intelligibility as the content itself.”
—Iain Gregory, Marketing Lead, Installed Sound at Harman Signal Processing, BSS

“When it comes to intelligibility, less is more, you need to have enough speakers to cover the area, but when possible, a single point source provides the best intelligibility. When designing for intelligibility, it is essential to pay attention to how different speakers interact at their coverage overlap. In a system with many point sources, proper time alignment of speakers can increase intelligibility greatly.”
—Steve Seable, Yamaha Systems Design Engineer

“Being able to deliver an input signal to the speaker is only part of the functions that an amplifier is responsible for. The other part is making sure that the speaker is operating within specification. If the loudspeaker is not, then there is a high probability that speech intelligibility will be decreased. Through DSP enabled amplifiers, it is possible to set limiters to ensure that your loudspeaker is not over driven and increasing distortion. Through sweep load monitoring or continuous load monitoring, we can determine how well the speaker is functioning.”
—Dan Saenz, Business Segment Manager, Install Sound, Crown Audio

“Don’t undersize your amp. Choose the appropriate quality, quantity, and the proper placement of all speakers. To get volume and audibility up, too many sacrifice amplifier headroom. It might be loud enough, but you’ve lost all ability to translate the nuances of speech (vowels, consonants, and transients), which is the difference between ‘hearing noise’ and ‘understanding an announcement or enjoying music.’ The right size of amplifier is key in intelligibility—remember that to achieve acceptable STI scores you need to have balance between the amplifier’s capability and being able to meet the ebb and flow of demands the system will experience.”
—TJ Adams, Paging Products Manager, Biamp Systems

“Speech intelligibility is impacted on a number of fronts ranging from mic selection and placement to the speaker’s ability and voice timbre to room and environment acoustics. With that in mind, it is important to recognize that processing applied in one room or environment doesn’t necessarily mean that those same settings will work in another room or environment. That said some general guidelines to bear in mind might include: rolling off the low end to help alleviate a ‘boomy’ or ‘muddy’ tone; be mindful of sibilance issues—EQ and compression adjustments can help; not burying the vocals in the mix if there are other input signals present in the mix; if there are other input signals present, a slight boost in the 1kHz to 4kHz might help improve intelligibility but may induce some sibilance and presence issues.”
—Phil Sanchez, Product Manager, QSC Audio Products

“Most Powersoft 2-, 4-, and 8-channel power amplifier models for installation and touring may optionally be fitted with on-board DSP and ethernet connectivity, enabling the optimization of any system for maximum intelligibility through proprietary Armonía Pro Audio Suite PC software. Duecanali and Ottocanali models are ready for voice evacuation systems and in compliance with the IEC 60849 emergency notification standards.”
—Ken Blecher, EVP, Powersoft

By custom tailoring the loudspeaker choice for a given perplexing venue, through careful study and CAAD ( Computer Aided Acoustic Design ) and knowledge of the directivity patterns, the sensitivity, the output, the bandwidth, the dynamic range, we can provide exceptional results, even in rooms where a public address announcement system was thought to be impossible.
—John T. Wiggins, Vice President, Community Professional Loudspeakers