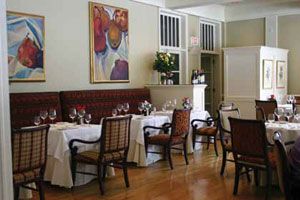 An Updated System Helps Keep Levels Under the Right Control

The music played at Langdon Hall varies, and the Symetrix Jupiter helps even the levels.

GUELPH, ON, CANADA—The Weinstein Group is an AV installation and event production company located in Fergus, ON. Over the decades that owner Michael Weinstein has been building, tuning, and fixing AV systems, he has observed that most systems go awry not through any fault of their own. Rather, it is the busy fingers of employees with just a little bit of AV knowledge attempting to make “improvements” that are anything but.

Langdon Hall Country House Hotel and Spa in Cambridge is an upscale establishment that clearly prizes quality over quantity. But set against such perfection, Langdon Hall wrestled with a dirty little secret for years before Weinstein came through with a solution. “Because the music they played in the restaurant and throughout the common areas of the hotel varied so much in its perceived loudness, the staff was forever turning it up or down too much,” said Weinstein. “For example, they would have a lovely violin concerto come on and the staff would say, ‘That’s too quiet!’ So they would turn it up. But then the next piece would be a strident piano etude, and they would overcompensate in the other direction.”

The advent of the ubiquitous “normalize” function on MP3 devices and software did little to help Langdon Hall’s troubles. “I just don’t think the consumer-grade normalize algorithm was prepared to deal with the kind of dynamic range that Langdon Hall was presenting,” said Weinstein. “No, the true fix came with the Symetrix Jupiter, which allowed me to very intuitively and very powerfully adjust the automatic gain control to work with the hotel’s program material. An additional—and critical—component of the solution is that none of the staff can make any adjustments. That’s a feature that I promote very heavily to managers.” In addition to the new Jupiter 8 (which provides eight inputs and eight outputs), Weinstein added two new MP3 players, a new mic input, and a new auxiliary line-level input. To transform the Jupiter hardware into the perfect software for Langdon Hall, Weinstein downloaded the “Sound Reinforcement #9” app from the Symetrix website.

The University Club at the University of Guelph is a private dining facility for faculty members, and it had a related problem. To begin with, its audio system was outdated and suffering from coverage issues. “The old system was centered on a combination mixer-amp that was driving an insufficient number of general-contractor-grade tin speakers that could have been at least 30 years old,” said Weinstein. “But age was only part of the problem. The mixer-amp presented 10 knobs of various functions to would-be improvers in a dark cabinet behind the bar. No one knew how to use it, and worse, no one could appreciate the fact that no amount of knob twiddling was going to fix the coverage issue.” In a well-intentioned but misguided effort to improve the situation, the staff invariably made it worse.

Weinstein gutted the old system and replaced it entirely with an appropriate number of high-fidelity EAW CI S80 and SMS-1990 ceiling speakers powered by new QSC amplifiers. In place of the old mixer, he installed a Symetrix Jupiter 4 (which provides four inputs, four outputs, and zero temptations) running the “Sound Reinforcement #4” app. With the Jupiter processor and a Symetrix ARC -2i wallpanel remote, Weinstein was also able to deliver much more sophisticated (yet simple) zone and volume control to the actual users of the system.