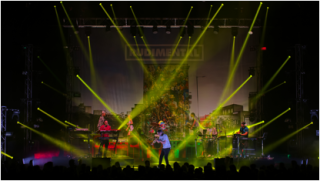 Rudimental for Pinnacle Event ProductionsRudimental’s multi-performer approach to their live show meant the band felt there was no need for video in their set design. Instead, they gave Gaskell a brief to create a set reminiscent of an old-school rock festival, with the Hackney Peace Carnivalmural as a backdrop that could be lit from behind or in front.

“Lighting was absolutely key to the design,” Gaskell explains. “The rig was based on three overhead trusses and six vertical truss towers on floor bases, with the latter at different heights to draw the audience’s gaze towards the mural. Thanks to wysiwyg, I was able to do a single plot from which I could get rigging points, rendering and programming – something no other software can do.”

Like so many LD’s today, Gaskell does a great deal of work in the corporate-event space as well as in live music touring. Ideas developed for one market often influence designs for the other and, as Gaskell points out: “When you have a tool like wysiwyg, it is just so much easier to convince a client – whether they are a band manager or a corporate account-holder – of the strength of your idea because they get a realistic snapshot of what things will look like.”