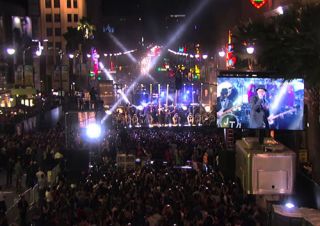 The marquis of the El Capitan Theater in Los Angeles became the backdrop for a free concert in front of 10,000 people when Jimmy Kimmel booked back-to-back superstar guests Sir Paul McCartney and Justin Timberlake on September 23 & 24. Upstage Video was front and center for the big event with their 10’x17’ Lighthouse R7 mobile LED screen.