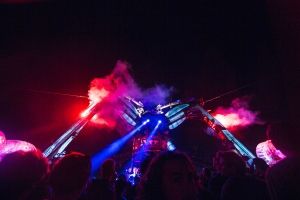 The massive Arcadia spider at Glastonbury with leg projections from Central Presentations Ltd.
The massive construction lurked ominously on what is now a designated area of the site set aside for the Arcadia team’s show. This year the new Arcadia ‘Metamorphosis’ show - complete with technical production, aerial stunts and dance beats - was one of the most talked-about events of the Festival.

After working with Arcadia last year, MD Matthew Boyce commented, “We were delighted to be back at Glasto this year and working with Arcadia’s hugely ambitious new show and their wonderful team of people … all of whom ensured that the ‘spectacular’ concept thrilled and entertained record breaking crowds each night”.

The spider – a fusion of industrial art and innovation – is now one of the most recognisable creative elements of the four day Glasto Festival which attracts 135,000 people to Worthy Farm in Pilton, Somerset, and is a popular nucleus for the community’s late night activity.
Metamorphosis started at 11 p.m. and delivered 30 minutes of ‘shock & awe, followed by a DJ line up for the Friday, Saturday and Sunday of the event.

CPL’s Richard Burrow was on site to help co-ordinate the show’s projection elements collaborating closely and tirelessly with Video Illusions, whose Dave Whiteoak first originated the idea of adding texturing and movement with video to the spider’s three legs, and with Tom Wall from blinkinLAB who created bespoke video footage and animations.

The projection system was designed by CPL and Video Illusions and comprised six Panasonic PT-DZ 21K projectors, each beaming onto the front and back of each spider leg.

The video footage was mapped precisely on to the legs using an AI media server, and the cues for the Metamorphosis show were all triggered by timecode generated by the overall show control system.

The projectors were rigged in weather-proof hides on six platforms placed around the Arcadia arena approximately 40 meters away from the spider structure. Much of the material was extremely subtle – if you can call a 12 metre tall spider ‘subtle’!