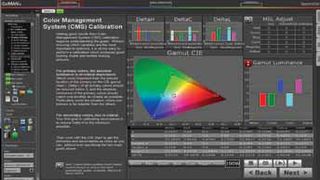 They may not be as interesting or glamorous as the bigticket items of equipment in an AV system, but installation tools—a catch-all term for those useful interconnects, tool kits, and widgets that assist the installation and operation of any system—can not only be cost- and time-savers, but also real life-savers for many technicians in the field.

L.A. Heberlein, CEO of video calibration experts SpectraCal, noted some interesting new color management developments, including the increasing appearance of an RS-232 connection on hardware. Using SpectraCal’s CalMAN calibration software, he said, “You can take a task that took 90 minutes and you can now do it in 90 seconds.”

The pro display market has lagged behind the residential market by up to two years in terms of calibration tools, due to the size of the latter market, he noted. But now, he said, “We are currently all atwitter about the new box from eeColor, which allows people to solve a lot of issues they couldn’t solve before.” The unit improves the contrast, brightness, and colorfulness of displays and projectors using visual models and 3D color processing.

Features formerly found only in the more expensive colorimeters have started to migrate into less expensive products, he continued. “The biggest example of that is the i1Display Pro from X-Rite, which was a major disruption in the meter market. It’s a huge leap forward, the largest thing we’ve seen in a decade.” Significantly, said Heberlein, i1Display Pro allows users to characterize it for new display technologies, which are more divergent than ever, without asking the user to send it back to the lab to be recalibrated.

Christopher Bundy, Atlona’s director of marketing, highlighted the company’s new KITPROHD3, which handily collects HDMI, HDCP, and EDID tools together in a single case. “It’s a support department in a box,” he said.

With HDMI also making the migration from the residential side into pro installations, Bundy noted that Atlona came up with the concept for a Swiss Army knife for HDMI management. The kit includes the AT-HD800 HDMI signal generator, a seven inch HDMI/ VGA/component monitor that recognizes any digital AV source and format, and the AT-HDSync EDID emulator.

“You really do need something that is going to be able to not only display what your EDID information and incompatibilities are, but fix them as well,” he said of the HD Sync. “It also maintains hot-plug at all times, dramatically reducing any switching time. Also, it’s a signal booster, so it cleans up the signal as it comes through.”