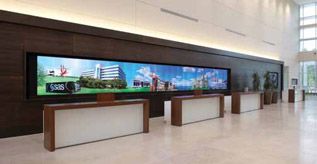 (Above) The lobby boasts three Christie MicroTile video walls of varying sizes.
(Below) In 2011, SAS’ media operation nearly doubled in size with the completion of a new executive briefing center on the campus.

CARY, NC—SAS is a leader in business analytics and one of the largest privately held software companies in the world. A production staff of 40 produces commercials as well as promotional, informative, and conference programming at its 900-acre campus in Cary, NC. Until recently the company’s on-site facilities included two studios, a 400- seat auditorium, and a 50-seat classroom, which are used internally and by outside organizations. In 2011, SAS’ media operation nearly doubled in size with the completion of a new executive briefing center on the campus.

The executive briefing center is housed in a new, LEE D-platinumcertified building known as Building C, and boasts a bevy of displays, projection screens, monitors, cameras, and other video sources throughout the facility. In terms of routing and control, planners had ambitious goals for the executive briefing center. They wanted a fiber routing system centered on 1080i using HD-SDI, with the ability to mix fiber and copper inputs/outputs. Their operation required a broadcastquality router and the ability to control it using existing soft- and hardpanel controllers. Another key requirement was the ability to control the routing system from either Building C or Building V—the building that houses the campus master control, studio, and headend equipment. That feature would allow Building V master control to switch signals as needed using SAS’ existing Utah Scientific routing system. They also wanted a system that could expand as their needs grew. And they wanted it all without upgrading the Utah Scientific equipment they already had in Building V master control.

“SAS has used Utah Scientific equipment for years and has always been happy with the performance and service, and wanted to stay with a solution they knew would work,” said lead project designer Derek Meares of Thorburn Associates, the independent consulting firm that worked with SAS on designing the acoustical and audiovisual systems. “Utah Scientific provided the best solution that also worked in conjunction with what they already had in place.”

The UT AH-400/288R routing switcher more than fulfilled all of SAS’ criteria. Its local input/output options exceed the requirements of 1080i, and its local I/O cards are 3G-SDI video-capable, giving SAS the ability to route video resolutions higher than 1080i in the future. The router provides options for single-mode fiber I/O cards to allow routing from building to building. Another key feature was the ability to route both fiber and copper feeds as needed, meaning SAS is not limited to one or the other. The Utah Scientific SC-4 control system allows the soft panels loaded on SAS computers to control the Utah Scientific equipment in both buildings.

The two acoustically advanced auditoriums offer theatrical lighting, wired and wireless microphones, and video mixers to polish recordings. The auditoriums each feature dual projectors by Christie Digital Projection that work together to form one large blended image on a central rear-projection screen, as well as two more Christie projectors that each cast a single image on frontprojection screens that sit on either side of the central screen. All screens are by Stewart Filmscreen. Each auditorium also has two Panasonic confidence monitors for the stage, a Panasonic display in the green room, and 12 Panasonic displays in the pre-function hall.

SAS has so far hosted more than 8,000 visitors to the center, and the facility is in high demand for client meetings and events that in some cases were held at other venues in the past. As further confirmation of its success, in April 2012 the executive briefing center received the World Class New Center award from the Association of Briefing Program Managers for its “world-class achievement in the design of briefing centers.”