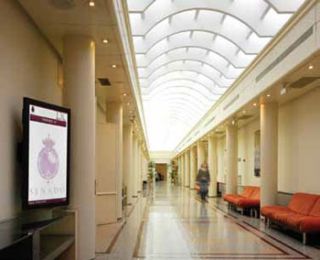 Spain’s politicians may be in complete agreement about some things — the need to be seen congratulating the nation’s World Cupwinning football team, for example — but in other areas of life there is considerably more heated debate. Many of these discussions take place in the Spanish Senate, the upper house of the nation’s parliament, located in the country’s capital, Madrid.

Here, the HMP100 Hyper Media Player by SpinetiX has been deployed alongside Tecnilogica’s “Poster Digital” content creation platform to create a cost-effective and easy-to-use method of broadcasting daily and weekly meeting schedules across the facility’s network of over 25 flat-panel screens.

The SpinetiX media players have been deployed alongside Tecnilogica’s “Poster Digital” content creation platform to create a cost-effective and easy-to-use method of broadcasting daily and weekly meeting schedules across the facility’s network of over 25 flat-panel screens.

Tecnilogica, which is based in Madrid, designed a graphic display template for the system in compliance with the Senate’s style guidelines, while the user interface was comissioned to Jesus Gorriti (one of the leading UX designers in Spain). Eduardo Noeda, the software architect of the project, takes up the story:

“The Senate was looking for a digital signage solution that would integrate easily with its existing IT and AV infrastructure, which was reliable and scalable. It needed to be easy to install and use, and had to offer value for money. The HMP100 was perfect because it uses an open architecture and could easily communicate with the Poster Digital system. We’ve also used the system at Coca-Cola, also located in Madrid, which employs around 200 people.”

The system includes private chambers as well as public spaces.

On this project, Noeda stresses, that there are failsafe modes and that the system thus far has been rugged and very easy to manage. “The web-based implementation of Poster Digital and the Hyper Media Players means that the whole system can be maintained by the in-house IT helpdesk, which devotes on average less than an hour per day to the task. This is despite the fact that the screens can display a wide range of information such as seating arrangements, speaker agendas, and voting data, and that they have a two-way interface with the Senate’s broadcast AV and other legacy networks.”

As well as being easy to use, the system is also cost-effective to maintain and configure. Serge Konter, marketing manager, SpinetiX, says: “The Spanish Senate project offers real-world evidence of our claims for cost-efficiency. The low power consumption and high reliability of our HMP100 means that the Senate is saving around 300 euro per player per year by comparison with a PC-based system. And, because of our open architecture, the system is expandable and will be able to incorporate interactivity — something that is already being planned for the future. This expandability will save the Senate even more money in the months and years to come.”