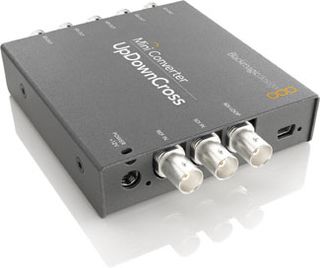 Blackmagic Design has lowered the price of its Mini Converter UpDownCross. The converter, which supports 3G-SDI and provides up and down conversions between SD and HD video, as well as cross conversions between different HD formats, will now be available for $295 U.S.

Mini Converter UpDownCross has a built-in frame re-synchronizer, low SDI jitter, multi-tap filtering, and connections for black burst/tri-sync input. It can also be used in bypass mode as a low-cost SDI distribution amplifier. When all processing is bypassed, customers get six clean, re-clocked SDI outputs that can be connected to any other SDI device.