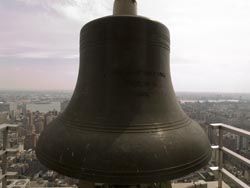 Panoramic Echoes is projected into the north end of Madison Square park from speakers located on rooftops of historic buildings surrounding the park like this one at the Metropolitan Life Tower.
An innovator in sound art for more than 30 years, Bill Fontana has created Panoramic Echoes as a sound sculpture with palpable layers of environmental sounds that move, float, and echo above the park's predominant sonic background of traffic noise. The sculpture's sound emerges and fades out again and again from different rooftops, for changing durations and always returning to the natural silence of the park, which is traffic noise.

Panoramic Echoes is projected into the north end of the park from speakers located on rooftops of historic buildings surrounding the park. The sound sculpture interacts with the live sounds of the long-silenced bells in The Metropolitan Life Tower facing the park. The MetLife Clock Tower system was installed in 1909, when the tower was the world's tallest building. Their Westminster Chimes once sounded their tuneful rhythm on mammoth bells occupying a position higher from the ground than any other bells in the world.

"Before this project came up we knew of Scharff Weisberg as a premier sound and video installation/staging company. So when we decided to work with Bill Fontana, we called Josh Weisberg and he connected us with Tony Rossello, who's been incredibly helpful," says Stewart Desmond of the Madison Square Park Conservancy.

Panoramic Echoes required that four speakers be installed on buildings around the park. The bells of the Metropolitan Life Tower at One Madison Avenue were also miked and projected into the park. Meyer Sound's parabolic speaker, the SB-1 or Sound Beam long-throw speaker, proved perfect for the job.

Two speakers are rigged from rooftop scaffolding to clear the parapet walls. Two other speakers are inside, but on scaffolding. All media is fed into the SB-1 speakers, which projects sound into the center of the park.

"The SB-1 targets the north end of park and is very spatial in the target area so it sounds almost quadraphonic: You can hear from different directions at different times," explains Scharff Weisberg project manager Tony Rossello. "In other areas, it's no longer spatial: you can hear it. We used Sennheiser 3532 receivers and SK1000 transmitters modified to run on AC power and timed to run for specific durations each day. It's a very simple yet effective system."
For more information visit www.scharffweisberg.com.