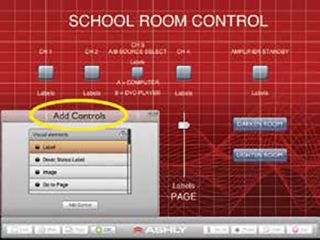 Ashly Remote App for iPads More than 36 million Americans have a hearing loss, according to the National Institute on Deafness and Other Communication Disorders. Many of them are teenagers and college students from the Earbud Generation, but 17 percent are adults, some of whom have headed back to college to retool in the Great Recession’s wake.

Research quantifies the benefits of using amplification so every student can hear the instructor. “The statistically significant gains in reading and language achievement test scores . . . were evident after only one year of use and the improved academic scores have been maintained for as much as three years,” according to the Mainstream Amplification Resource Room Study. “The amplification was found to be more cost effective than supplementary resource room instruction in staff utilizations, lower initial and continuing educational costs and personal costs to students who avoided the stigma, segregation and restrictions of special placement.”

Here are a few more technologies and tips to consider.

One trend in higher ed is a shift away from the sage-on-the-stage style of teaching. Instructors often prefer to wander rather than lean on a podium, for example, while larger classrooms sometimes are reconfigured to enable huddle-style collaboration.

Those changes make wired mics increasingly impractical. Even when podiums are used, they’re sometimes rolled out rather than permanently installed. Hence the appeal of wireless goosenecks there.

Wireless mics also sometimes are used instead of ceiling mics. One reason is because people’s voices project out in front of them rather than up into the ceiling.

“[Ceiling mics] have to be ultra sensitive because they have a relatively small cone of pick up, but you can have fairly high ceilings,” said Tim Root, Revolabs CTO and executive vice president of new business development. “So you have to crank those mics up to the point where you pick up a huge amount of noise.

Extron Electronics’ CS 123T SpeedMount offers 165-degree conical dispersion “The DSPs end up having sophisticated gaining algorithms to try not to pick up the noise and focus on the teacher, but it’s a very complicated implementation to get right. Most often, it’s not right. It’s very difficult to execute.”

The best audio system is as effective as two cans and string if instructors and students can’t figure out how to use it. Obvious? Not necessarily.

“One of the most over-looked aspects when choosing a pro audio system is the ease of operation,” said John Sexton, Ashly Audio sales director. “As the technical sophistication of the audio system has increased, it is important that the inexperienced end-users have a friendly interface that allows them to control basic sound system functions.”

That’s why Ashly Audio recently launched the Ashly Remote App for iPads, leveraging the familiarity that most people now have with the iOS user interface. Each interface you design gives you custom control of your Ashly product, all from one place. Add components specific to your system by designing menu systems, faders with text labels, toggles, as well as visual elements like a logo and/or background images that fit a certain theme. Multiple pages within your design can be created and linked as a part of the same design.

Another option is to hire an integrator to design a custom wireless remote. Either way, you and your staff will benefit, too, from spending less time running from room to room giving crash courses.

Finally, don’t forget that strategies from other environments often apply to schools, too.