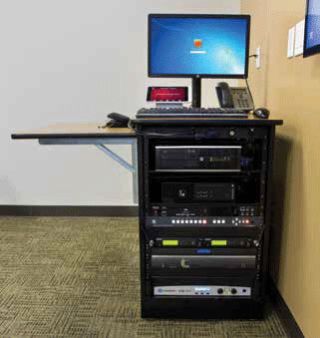 A SIMPLE SWITCHER SOLVES A COMPLEX PROBLEM FOR THIS UNIQUE UNIVERSITY APPLICATION.

Azusa Pacific University’s innovative AV set-up includes VC & PTZ cameras. When it comes to providing quality nursing education, Azusa Pacific University (APU) proves that you don’t have to be big to achieve excellence. With a main two-campus site based in suburban Azusa, CA, plus six regional campuses throughout the state, APU’s total undergraduate student body is around 6,500. Yet this private Christian college’s nursing program—and indeed its entire curriculum—is consistently ranked as one of the nation’s very best by U.S. News & World Report, year after year.

“As these accolades keep coming in, our nursing program enrollment keeps growing,” said Andy Vivanco, executive director of APU’s IMT Media Services, IMT Support Desk, IMT Computer Store, and IT Procurement. “So we are constantly looking to maintain and improve the quality of education we provide to our nursing students, in ways that keeps up with growth and works within our budgets.”

Mindful of the cost-effectiveness, convenience, and teaching quality offered by videoconferencing (VC), APU has been testing a scalable, multi-camera VC system for use initially by nursing faculty and staff, with the goal of expanding into the classroom. “This supports our overall Video Collaboration Strategy and Vision that ‘IMT will enable the APU community to collaborate with anyone, wherever they are, with any device they choose’,” said Vivanco.

The APU VC trial links the Azusa West Campus’ conference room (origination) with a satellite lecture hall in its Monrovia location. The two sites are connected via the high-resolution Vidyo professional VC platform in parallel with lower-resolution consumer Internet-based options such as Google Hangouts.

If the test system works as expected, it will serve as the model for larger scale roll-outs throughout all of APU. Being able to use VC-equipped classrooms would definitely reduce travel time for students and teachers alike, and let one instructor teach in many locations at the same time.

The APU test system was designed and installed by db Media Group of Laguna Hills, CA. “For the two rooms to work as planned, they were equipped with two Sony EVI-HD7 PTZ cameras each to capture both the teachers and students, presenters and conferees,” said Dan Burdett, owner of db Media Group. “Add large video displays—a 110-inch Da-Lite projection screen in the conference room and a 750-inch Samsung DM75E LED display in the conference room—multiple Earthworks IM3-W gooseneck microphones and in-ceiling JBL 45C/T speakers, and the result are two linked spaces that work pretty much as one,” he said. “Using multi-camera switching controlled by the instructor in the conference room, the students can see who is talking in either space in real-time.”

The only problem: Switching between the conference room’s four EVI-HD7 cameras can generate synchronization issues where the changing signals hit the room’s Vidyo HD-230 (DEV-RM-HD230-SA) VC codec box. “When you switch between the camera sources going to the codec, the video feed can suddenly flicker or freeze until the units sync up properly,” said Vivanco. “It disrupts the flow of the videoconference and doesn’t have the smoothness that we want to achieve.”

The Earthworks IM Installation Series gooseneck series were installed for enhanced EVI-HD7 cameras can generate synchronization issues where the intelligability.ENTER THE VSW-2200

Clearly, APU’s multi-camera feed issues needed to be addressed. To do so, db Media Group turned to Marshall Electronics, one of its key equipment suppliers. In turn, Marshall Electronics offered up its $1,300 VSW-2200, a simple yet seamless four source HD-SDI audio/video switcher.

“The beauty of the VSW-2200 is that it supports switching between up to four cameras without the codec detecting the switch,” said Perry Goldstein, Marshall Electronics’ Director Of Business Development Pro AV. “Its features and operation are simple, and aimed at web conferencing and streaming, not broadcast production. Without this switcher, the school would have been stuck with only one PTZ in the conference room, rather than up to four cameras.”

An iPad mini provides the control interface. Promoted as a “small studio video presentation switcher,” the VSW-2200 AV switcher can switch seamlessly between four 3G/HD/HD-SDI formatted feeds. Its HDMI/SDI outputs provide re-clocking and equalization, thus ensuring that the outgoing signal will not experience sync issues when it encounters a VC codec.

As well, the VSW-2200 can output its four feeds in Quad view via a separate HDMI output port, and also has ports for Ethernet and mini-USB. The unit can be switched using its four front panel source buttons, or over an IP network using Ethernet-connected devices (both wired and wireless).

Theoretically, the APU conference room instructor could control the VSW-2200 directly, going from camera to camera by pushing buttons on the unit’s front panel. However, mindful that instructors don’t like to remain pinned down in one place, db Media has integrated control of the VSW 2200’s functions (and the whole system) to a wireless iPad Mini.

Azusa Pacific University hopes to extend its VC system throughout its many campuses. The instructor simply picks up the iPad Mini at the start of class, and keeps it with them during the sessions to do camera switches as needed. They can also use the iPad Mini interface to live-control each room’s PTZ cameras, supporting zoom-ins and rotations as required to get each speaker clearly into the center of the screen. “We have configured a number of camera presets into the iPad Mini’s program, so that a room can be set up for a specific coverage configuration at the touch of the screen,” said Burdett.

“The switcher also comes with an IR remote control, which makes changing inputs as easy as changing channels on your TV, literally,” said Goldstein. He added that “the VSW-2200 works with a Crestron control system.”

Since equipping its two-site VC system with the Marshall Electronics VSW-2200, APU has been quite impressed with the results. “The system is very easy for our instructors to use, especially because the control system is running the iPad Mini,” said Andy Vivanco. “They just grab the iPad when they come into the room, switch the system on (including selecting a camera preset if they have one), dial in the other room using the Vidyo, traditional, teleconference, or any PC application, and the cameras and microphones in both locations are ready to go.”

Based on the results that this test deployment is achieving, it is likely that Azusa Pacific University will extend its VC system throughout its many campuses, and the VSW-2200 switcher will play a part in it.

“There is a real demand to improve the experience (of videoconferencing) by adding multiple camera angles,” said Perry Goldstein. “The VSW-2200 makes that experience possible. It’s affordable and easy to use, which makes it a great solution for the education market.”

James Careless is an Ottawa-based technology writer and regular contributor to AV Technology.