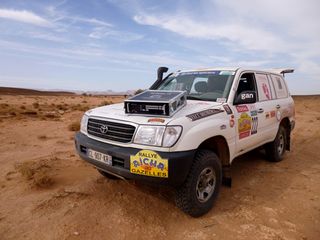 The “Rallye AÏcha des Gazelles Morocco” is an automobile competition for women only. Completely off-road and without GPS, the rally is based on old-fashioned navigation. The objective of the racing teams is to perform the different trials with the most accurate course.

On March 16, 2013, about 150 teams and 30 nationalities were present on the starting line. Among them, team 222 sponsored by Analog Way left from the foot of the Eiffel Tower with a NeXtage 16 in its vehicle, a new AV processor based on the LiveCore platform.

Riding in a basic flight case, the NeXtage 16 took to the road for a 15 day race, including 3500km (2175 miles approx.) driven in the Moroccan desert.

Franck Facon, Marketing & Communications Director at Analog Way, said, “Beyond the adventure and the values of solidarity displayed in the “Rallye Aïcha des Gazelles Morocco,” the race was a great opportunity to thoroughly test the durability of our new platform. The design of the LiveCore platform was conceived to ensure maximum reliability even in the worst conditions.”

After 6 days of trials in Morocco, the Analog Way team came back to Paris in early April ending a journey of more than 6500km (4000mi). The NeXtage 16 was then returned to Analog Way’s headquarters where the unit was submitted to a series of tests: the product was switched on normally; it was then controlled through the TFT screen on its front panel, and also from a PC through its Web-based Remote Control Software. All tests were successful.

“In addition to other series of tests we did in laboratories, the two weeks of the “Rallye Aïcha des Gazelles Morocco” demonstrated the solidity of our new generation of mixers. The work done on the selection of components, the mechanical design and the assembly processes have proved their worth during this demanding race.”