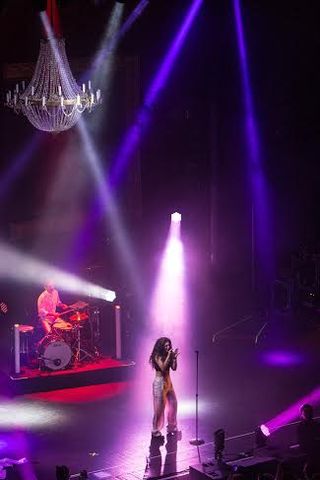 With the acquisition of its new K2 system, Bauder Audio becomes Philadelphia's first L-ACOUSTICS sound system provider. With four more SB18 subs, a sixth LA-RAK and 18 more KARA enclosures (for a total of 30 KARA) on the way, Bauder has achieved L-ACOUSTICS' K-Standard and officially been designated a "Certified Provider" (CP) within the manufacturer's Rental Network.

Bauder Audio Production Manager, Brian Naab, of the performance at the Tower Theater, a Live Nation venue says: "Lorde's front-of-house mixer, Philip Harvey, was thrilled with the rig. Everyone also commented on the power and the coverage of the SB28 subs; they reached the rear of the main floor and upper-balcony seating without any problem.

To ensure the best possible performance from the new system, several L-ACOUSTICS team members joined Bauder Audio's crew onsite three days prior to the show. During that time, the manufacturer helped set up and tune the rig as well as provided training for a dozen of Bauder's employees on fundamentals, theory and practical applications for K2 and KARA.

Naab explains the strategy behind Bauder's recent purchase. "We were looking for a large-format line source array system to expand our client base, to be able to service larger venues up to sheds and arenas," he says. "We chose several manufacturers' systems to compare and in every aspect--performance, sound, weight and simplicity of rigging--the K2 came out ahead. It offered a number of operational advantages.We expect a very good return on investment from K2."