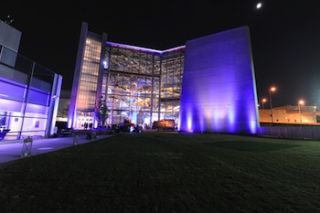 Using CAL's beam-steering technology, New Orleans-based JBA Consulting Engineers has created a system that delivers highly intelligible music and speech while tailoring coverage for the audience size at an event.

The Boeing Center is a 36,000-square-foot angular edifice dominated by a five-story, steel-and-glass atrium which houses six wartime aircraft suspended in frozen flight, including a B-17 Flying Fortress. Despite the acoustical hazards posed by surfaces of glass and concrete, the CAL loudspeakers allow the museum to direct exceptional audio clarity to the audience for almost daily programs of lectures, video screenings, and musical entertainment.

"We were originally skeptical about having decent sound in the space, largely based on prior experience in another pavilion using older technology," said associate vice president of operations for the museum, Paul Parrie. "But we are amazed at how well the Meyer Sound CAL system works here, and we are very pleased with it."

Precise, uniform coverage of the 700-person capacity audience area is provided by two CAL 64 loudspeakers, aided by two UPJunior VariO loudspeakers for near-stage fill. Low end for music and video playback programming is supplied by dual 600-HP subwoofers. The CAL loudspeakers are programmed with two presets: one uses dual split beams on both sides for larger audiences, while the other uses a single beam at a steeper angle for smaller audiences.

"The wall opposite the stage is five stories of solid glass, and because the room is asymmetrical, the throw is much shorter on one side than the other," senior project consultant for JBA, Rob Pourciau said. "We needed loudspeakers that could tailor precise coverage for the space, then change coverage depending on audience size, while providing both high speech intelligibility and superb music quality. CAL is the only system that could do it all and still keep the architects happy with its unobtrusive appearance."

The Boeing Center was part of a recent $35 million renovation to the museum. Voorsanger Mathes was the architect and Woodward Design + Build was the general contractor.