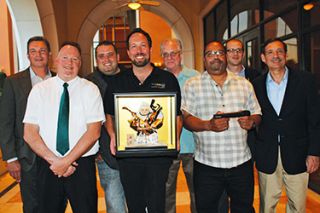 Audio-Technica named Alliance Audio Visual Group its "Rep of the Year" for distribution of its wired and wireless microphones, headphones, and audio products in the Sourthern California and Nevada regions. Alliance's general manager and account executive, Matthew Jensen, accepted the award on the company's behalf.