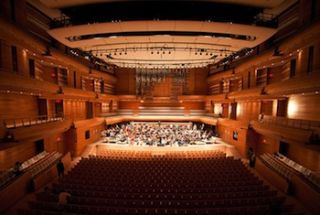 While most of the publicity surrounding the building's opening is centered on the state-of-the-art acoustical experience that awaits its patrons, La Maison is just as sophisticated behind the scenes. Indeed, Artec Consultants designed a comprehensive, yet intuitive paging system that will ensure that the production quality of the events at La Maison will meet the highest expectations. Philippe Beaudoin of Montréal-based AV integrator Solotech programmed and installed the Symetrix SymNet-based signal processing and interface technology that makes the paging system possible.

Six zones comprise the paging system. The lobby zone conveys pages for patrons, typically before performances and during intermission and retransmits the audio captured within the hall for late arrivers. Based on their physical layout and intended usage, there are two separate dressing room zones. The stage manager's booth, the recordist's booth, the house audio mixer, the follow spot operators and the lighting board op, get their own zone. The venue managers' offices get their own separate zone. The final zone patches through the main audio mixer into the house sound system. Over three-hundred McBride 820CXB paging loudspeakers powered by two QSC CX-204V and two QSC-1202 amplifiers deliver the paging system's output.

The linchpin of La Maison's paging system is the Symetrix ARC-SW4 and ARC-XLR, a pair of wall panel remotes with integrator-programmable push buttons and an XLR jack. Room managers and stage managers have their own Symetrix ARC-SW4 and ARC-XLR to handle outgoing pages, and each one is configured the same way. Two mobile racks can be plugged and patched from different areas of the venue for temporary needs of traveling productions and events. Of its eight buttons, six are labeled by zone. To deliver a page, the user pushes a button for each of the zones that he or she wants to include. Then a push-to-talk button, combined with a Shure 527B microphone, executes the page. Additional features include a push-button chime, which calls patrons to the hall prior to a performance or after an intermission, and a volume control override button. Although it may find other uses, the volume override button's intended purpose is to deliver urgent messages, such as when a musician or the conductor needs to be called from the dressing room to the stage.

An open-architecture Symetrix SymNet 8x8 DSP, supplemented by a Symetrix Control I/O, sits in the middle of the system. It ably handles the complex routing required of the system, along with all of the frequency and dynamics processing nuances that make the pages not only functional, but also pleasant.