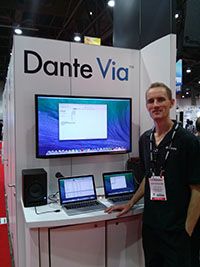 Audinate and Bose Professional are gearing up for their next session of the AV Networking Roadshow focusing on Dante technology. The roadshow will occur at the Japanese American Cultural & Community Center in Los Angeles on Wednesday, December 17, 9:00 a.m. - 4:30 p.m.

Dante, created by Audinate, is the leading audio-over-IP networking solution.

“Introduction to AV Networking” is a free, one-day session sponsored by Bose Professional and Audinate, with support from Attero Tech, Audio-Technica, Digital Audio Labs, Shure, and Focusrite. The session continues the AV Networking Roadshow series, which has so far included events in Dubai and New York City.

Presenters will include Bernie Farkus of Audinate and Darryl Bryans and Trevor Donarski of Bose Corporation. The session is eligible for three Renewal Units for InfoComm certification holders.

Darryl Bryans, Product Line Manager, DSP, Bose Professional, stated, “The AV Networking Roadshow is a great way to quickly come up to speed on the latest information regarding audio networking and to get some hands-on experience using Dante audio networking technology and a variety of products. We’re pleased to be working together with Audinate and the other participating manufacturers to offer these sessions. By the end of the day, participants should be able to confidently implement and install a Dante enabled system.”"As the market leader in media networking, Audinate believes that one of the ways people can fully appreciate just how easy Dante is to install, integrate and use is to support our OEM partners in educating their customers," said Ervin Grinberg, Director of Marketing, Audinate. "Dante is the most requested networking technology, and we are pleased to showcase the benefits regionally to present this hands-on, comprehensive, well thought-out program.”

Session topics include:
•Connecting devices and routing audio over a Dante network
•Network switch configuration for various applications
•Working with IT managers to define network requirements

Future AV Networking Roadshow events are being scheduled for Chicago, Germany, Japan and the U.K.