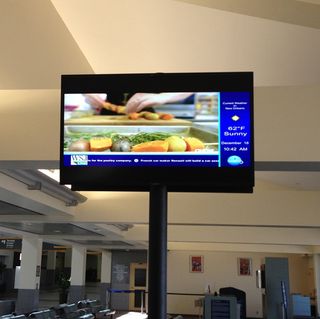 “We are broadcasters in the Away-From-Home arena and wanted to operate a program day that was scheduled hour by hour, minute by minute,” said Tetreault. “We run a program log that is dynamic and always changing. InfoCaster gave us the ability to plug in 12 minutes of advertising, three minutes of local branding per airport, and 45 minutes of entertainment content on an hourly basis for 18 hours each broadcast day. We can program many unique channels just as a TV station or cable company operates.”

Mike Cavanaugh, president of Keycode Media, adds that InfoCaster allows ClearVision to clearly differentiate its services from other airport TV networks by creating and distributing unique content that is specific to each airport — as well as track any and all advertising placements across the entire network. “You can imagine how complex it is to track ad placements across multiple airports, all with their own unique broadcast channels,” said Cavanagh. “The InfoCaster software allows ClearVision to do it seamlessly and efficiently while creating an attractive return on investment.”

Cavanagh adds that while airports will share network entertainment and some general content, the InfoCaster Network Manager tool makes it “easy to drag and drop the unique commercials and content for each city.”

Henry Mauriss, chief executive officer at ConnectiVISION, said he expects the InfoCaster software will bring additional business benefits to the forefront of the operation, providing advertisers with proof of performance and opening last-minute windows into avails for up-to-the-minute ad scheduling. This strategy drives home the point that ClearVision is a broadcast operation. InfoCaster is in fact part of a large Harris Broadcast family of graphics and channel branding products used by top network broadcasters.