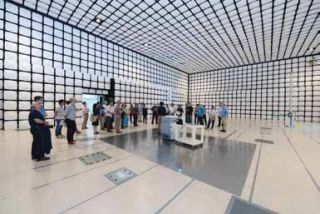 Housed in Samsung’s Digital City, the EMI (Electronic Magnetic Interference) chamber was built to measure electromagnetic radiation of a running electronic device. It works by setting a limit on the electromagnetic waves and examining if the printer releases an amount lower than the limit. The chamber adopted the two antenna mast measurement method; the antenna moves in four directions to measure the electromagnetic waves of a running printer placed in the center of the chamber. It shows results on-screen immediately after each measurement. South Korea is “on.” Literally. The economy is growing again. According to the BBC Business News, Asia’s fourth largest economy has reported better than forecasted growth numbers for the second quarter of the year. Its GDP ranks 15th in the world.

The coffee industry isn’t even a blip on the economic radar compared with Korea’s LCD, automobile, semiconductor, shipbuilding, and IT industries. Nonetheless, the ubiquity of coffeeshops along the bustling streets of Seoul piqued my interest. In East-meets-West style you can select among single-origin artisinal pours, triple grande Starbucks, or the super-sweet Dunkin’ Donuts frappe that I avoid back home in the U.S. Coffee was a fitting motif for my recent trip to the high-octane, “always on” metropolis and Samsung’s Digital City in Suwon. In July, I traveled to Seoul with an editorial contingent to preview Samsung’s Near Field Communications-enabled product line. This trip was a cultural and business immersion; the main takeaway was that Samsung is hedging bets on a new product line for a new generation—the post-PC user for whom mobility is the priority. Ease-of-use and turnkey abilities make Samsung’s new Xpress C410W NFC-enabled multi-function printing line notable for education technology managers and tech administrators across the wide bow of commerical AV.

A New Strategy for a New Kind of User

Integral to the new strategy is the Samsung Mobile Print App which lets users print directly from mobile devices. You can print Google Drive documents, PDFs, a Facebook update, a digest of the week’s Tweets, MS Office files, and anything else you can imagine, right from your phone or tablet. Using a recipe of NFC and Wi-Fi Direct Technology, the Samsung team wanted to create a solution that would benefit their increasingly nomadic customers.

Welcome to Samsung Digital City. This main complex in Suwon—about 20 miles
outside of Seoul—employs more than 30,000 people and is equipped with an in-house
testing lab for product safety and reliability. The newest building—R5—is the fifth Samsung research institute to be constructed within the Digital City and further integrates its IT and mobile divisions. Samsung is also amping up R&D efforts for its next-generation smart devices and wearable technology. Employee perks at the Digital City rival Silicon Valley’s elites: on your lunch break you can scale a climbing wall, relax in yoga class, take a spin on a campus bicycle rental, or dive into the Olympic-sized swimming pool. Conservation is another priority. More than 90% of the lighting systems in the new R5 building use LEDs that consume 40% less power than ordinary systems. NFC and Wi-Fi Direct offer separate benefits, according to Samsung’s executives. NFC is a wireless connectivity technology that allows any device within a 1.5-inch- (4-centimeter-) radius to be connected to another device by tapping them together. Wi-Fi Direct enables the quick exchange of data between connected devices. These technologies had already been implemented in the Galaxy S series but now are now combined for use between printers and smartphones.

Users without NFC-enabled phones or the Samsung Mobile Print App, have no fear. You can still use the Xpress C410W printer series. Its support for Google Cloud Print lets you print via the Web from anywhere, with any smart device. Owners of Samsung’s Galaxy-branded smartphones and tablets can print images from the gallery app, documents, email, and Web browser pages.

Mobile printing is quickly becoming a must-have function on the consumer-level. AirPrint functionality—launched in 2010—enables wireless printing from an iPad, iPhone, iPod touch, and Mac without the need to install drivers or download software. The Samsung Mobile Print App and embedded printing function were launched in 2009. There are also driver updates and mobile add-ons from companies like Canon and Brother. For enterprise grade applications, however, wireless printing needs extra security. "For the first time among printer manufacturers, Samsung Electronics has achieved official certification for Wi-Fi Direct Technology," explained principal Engineer Dongchae Park, printing solutions business R&D team, Samsung Electronics. "There have been emerging technologies in mobile printing before, however, not many of those technologies went through the certification process. Leveraging Samsung's technology leadership, we plan to expand Wi-Fi Direct into enterprise products."

There are three main reasons why Samsung’s NFC printing offerings are notable for commercial technology managers:

The mobility, BYOD magic is out of the bottle, and there is no going back. Data from the International Telecommunications Union suggest that by 2014 the number of mobile phones in use will hit 7.3 billion. Samsung designed its Xpress C410W series to connect wirelessly with mobile devices for printing on the go and environments that rely less and less on traditional desktop computers with connected printers.

“We decided to make ‘tap to print’ work for most smartphones on Android 4.0 or higher,” said associate Wuseok Jang, printing solutions business R&D team, Samsung Electronics. “That was a big challenge for us as it required compatibility with any Android mobile device from anywhere in the world. We conducted hundreds of thousands of tests to ensure that our customers did not have to worry about any complicated procedures when printing via NFC.”

Scanning and faxing documents are also possible since users can sync contacts on smartphones with the Xpress line, via the Samsung Mobile Print app.

The process of setting up wireless printers usually involves multiple steps to take the printer online and set-up network keys. With Samsung’s Xpress C410W series, installation is done in three steps without the need for a separate wireless set-up or USB connection between the printer and computer. Samsung has developed in-house solutions and an ecosystem of ISV (Independent Software Vendor) solutions partners. Remote device management is handled by a proprietary feature called SmartThru.

The Xpress line also features the Easy Printer Manager feature that helps users manage their software without the need for specialized IT managers. Users can monitor printer status such as error messages, paper empty, toner empty, and paper jam alerts.

On the security front, Samsung says that they are offering the only industry-certified Wi-FI Direct for the enterprise. “IT environments are something that we are obviously familiar with, but we recognize this isn’t always the case for general users,” said Chiwan Bae, director, printing solutions business sales and marketing team, Samsung Electronics. “Making printing easy without any problem, under any circumstance—that was what Samsung’s mobile printing had to aspire to, and something we knew we could achieve.”

Samsung’s printer Xpress C410W series consists of the C410W color laser printer, the C460W color laser MFPs with print, copy, and scan functionality, and the C460FW color laser MFPs with print, copy, scan, and fax capabilities. These C410W series are
notable for technology managers and facility directors who support BYOD, post-PC environments, and users who want to print directly from tablets and smartphones. The three new models can print up to 18 pages-per-minute in black and white, and four in color.

3. Will NFC pass the test for a connected "Smart School"?

Samsung’s NFC-enabled line will play a central role in the Smart School concept in which the wide breadth of the company’s products are securely connected for student-centered learning and wireless printing. Additionally, schools can use the One Touch Eco Button and Easy Eco Driver to save up to 20 percent in overall costs. With the high cost of printer ink, and hundreds of printers deployed in computer labs across a campus, every dollar matters.

The Samsung Mobile Print App is available now via the Google Play Store and iOS App Store. The Xpress line launched in July for the U.S. market. In October, turkey NFC printing solutions for SMB customers will be offered. Visit Samsung for more information.