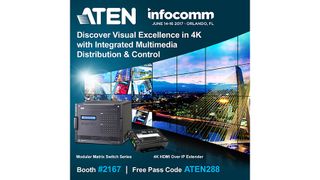 ATEN (booth 2167) plans to exhibit at InfoComm 2017 at June 14-16 at the Orange County Convention Center in Orlando, Florida. Key highlights at the ATEN booth will include live demonstrations of its new 32x32 modular matrix switch (the VM3200) and the North American debut of its 4K HDMI-Over-IP Extender. ATEN will also showcase its three-in-one video wall media player and the ATEN Control System.

The VE8950 4K HDMI-Over-IP Extender will also appear at the booth to demonstrate how it supports the video matrix function through AP router/DHCP protocol with an unlimited transmission distance.

ATEN’s VS1912 12-Port DP Video Wall Media Player is a PC-based media player and is designed for multi-display applications such as digital signage, video walls, projection screens, and digital board installations. The VS1912 supports video wall configurations with up to 12 displays and allows users to design creative video walls in various asymmetric layouts. Custom widget tools allow users to add banners, video playback, flash media, images, and real-time clock displays over traditional media. The customization features enables users to resize, layer (including Picture in Picture), span across multiple screens and even rotate pictures and videos at 90 degree intervals.