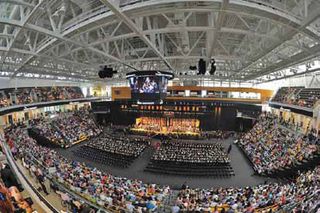 The new home to Towson University’s basketball, volleyball, and gymnastics programs, as well as a series of special events, the Tiger Arena opened this spring just in time for graduation.

AVI -SPL’s office in Columbia, MD worked in conjunction with Baltimore’s Nelson White Systems to oversee the installation of the audiovisual systems throughout the facility. AVI -SPL handled the integration of the arena audio system, as well as the video production and broadcast cable systems, while Nelson White was charged with installing the distributed audio systems and AV infrastructure for the facility’s V.I.P. suites, pressrooms, multipurpose rooms, and locker rooms.

Will Parry, senior vice president of AVI -SPL’s Special Projects Group, explained that R.K. Frank Rankin, Towson’s production manager, came to his firm after hearing the loudspeaker system his team installed at the U.S. Naval Academy in Annapolis, MD, by ISP Technologies. “His number-one goal was excellence in sound quality,” he said. “The system is extremely articulate and very hi-fi.” At the Tiger Arena, AVI - SPL installed four motorized loudspeaker clusters comprised of ISP HDL4210s, two custom ISP HDL2208-6C cabinet speakers pointing straight down into the court, and four ISP XMAX212 subwoofers in the catwalk. Atlanta Rigging Systems out of Atlanta, GA, supplied the motors and motor control systems, and hung all of the loudspeakers.

Parry recounts that the main challenge on this project was timing: due to the way budgeting worked, the AV integrators were brought on board late in the game. This presented some issues when it came to hanging the clusters. “The building was really far along when we hung the speakers, so we were quite out of sequence,” he said. “That’s one of the reasons that we brought Atlanta Rigging in, because they are able to walk the steel, which saved a lot of money on lifts—the lifts were very expensive, it’s a high ceiling, and we were working at this time on a finished floor.”

Don Alberg, project engineer for this job, and senior design engineer at AVI -SPL, noted that the installers were able to work on the finished floor thanks to a “lightweight” boom lift. The installation team first laid down protective coating paper and then two sheets of interlocking plywood over top so that the lift could be brought out without causing damage. “Lightweight,” however, is a relative term: the lift weighed 7,000 pounds. “A standard lift weight is somewhere around 26,000 pounds, and that would have crushed the floor,” he said.

The main production room features a Midas DL251 control head and XTA DC1048 audio processing, while the facility’s third floor production space is equipped with a Midas Pro2 audio mixer, Lectrosonics wireless microphone systems, KRK audio monitoring, and Apple iPads for control. The broadcast cabling system, which unites broadcast functionality for both the Tiger Arena as well as the Johnny Unitas Stadium, is designed to enable facility-wide, local, and national broadcasts. “We extended all the lines from the Johnny Unitas Stadium, which is across the street, through manholes and then up into the building, and then built a new broadcast pedestal outside,” Parry explained. National broadcast trucks can patch in and have access to high-definition video signals throughout both buildings. The two buildings are connected via 48 strands of fiber optic cabling.

The distributed audio system features a combination of ISP HDDS 650P and HDDA 651 ceiling speakers, ISP HDDS SB112 subwoofers, ISP HDDS Master Control, Extron audio switching, and Extron Media Link control. As budget allows, Nelson White will return to install the full AV systems in the facility’s ancillary spaces—the VI P suites, locker rooms, and multipurpose spaces. Like AVI -SPL, Nelson White had to adjust to the fast-tracked scheduling—and therefore, finished ceilings. “One challenge was that the drywall ceiling was in place before we got to put in the back boxes for the speakers, so our installation team had to get a little bit creative to get those devices installed,” said Paul Stephens, sales engineer at the company.

While the project scheduling produced some challenges, both the teams at AVI -SPL and Nelson White noted that thanks to the willing communication and coordination between everyone involved, the project went relatively smoothly. “It required a tremendous amount of coordination and cooperation between all members of the team to pull the project off on time—not only for us and AVI -SPL, but also for the electrical contractor, the rigging contractor, and the general contractor,” said Lou Dollenger, vice president of sales at Nelson White and a Towson University alumnus. “The trades were on top of each other, all working in coordination to make sure that graduation came off in time.”