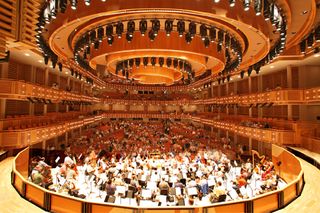 “The space is designed to host everything from symphony orchestras to Willie Nelson, Cindy Lauper and BB King,” says Tony Tur, head electrician at the Knight Concert Hall. “We were running another console, and a lot of people were asking for the grandMA. I attended a grandMA2 training course and really liked the console’s features and versatility. It was the kind of technology we needed, capable of accommodating a rock show, a symphony or a musical comedy, and meeting the needs of their designers.”

Steve Welsh, vice president of Miami Stagecraft, echoes Tur’s observations that many touring groups appearing at the Knight Concert Hall were accustomed to using grandMA. In addition, “because of the way the hall is configured there are very few conventional lights,” Welsh points out. “The space is highly-dependent on moving lights mounted to the ceiling and that also helped tip the scales in grandMA’s favor.”

Welsh notes that in order to give the grandMA2 high-speed response time, the hall’s entire network required an upgrade. “grandMA runs flawlessly on a gigabit network,” he says, “so we upgraded the whole system to be 1gb capable. The movable ceilings feed data down to fiber-optic cables even when they’re moving – we had to upgrade all that to 1gb with industrial-grade components.”

Will Murphy, A.C.T Lighting technical support, says that the hall originally had “a big fiber network and all these little gangbox two-universe nodes around the space. When Tony (Tur) fell in love with the grandMA2 they needed to decide what to do with the existing network. So we started to talk about what would make their life easier.”

He explained to Tur that “MAnet is the only protocol in the industry with frame-synchronous DMX. If you have a properly-designed gigabit network, no matter how close or far apart ports are, everything is going to be frame synchronous: the frame comes out of every port at the same time regardless of length. No protocol but MAnet can do that and deliver two-way communication.”

Tur specified a grandMA2 console with NPU and a second unit with 18 2-port nodes. “Tony chose to go all-MA to get 100 percent support,” Murphy says.

The upgraded network “eliminated a lot of equipment on the racks and a lot of connection points with the possibility of faults,” says Tur. “The network was very simple to put together and worked from the get-go: It was all done in two days. Now I have a system where I can communicate right to the nodes from the console; I don’t need another computer to do that. A.C.T’s customer support was another reason I decided to go with the nodes – it’s just amazing. They are there to help me out.”

Welsh concurs that the installation “came out very nicely. There are very reliable communications throughout the system, especially the fiber-optic cable reels.”

Tur reports that the grandMA2s and network are “working great. We just ran BB King and a couple of symphonies, and it’s been very smooth. The grandMA gives us the versatility to do everything. That’s just what people were requesting.”

Welsh believes that the hall’s installation represents “a new phase in the lighting of the theater. They now have a control system that will carry them into the future with LEDs and new lighting fixtures.”