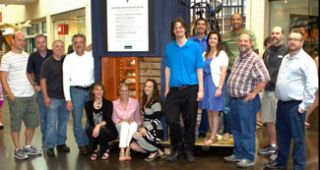 ‘Buckaroo Mountain Adventure’ effectively turns any backyard or play space into an expedition of the imagination for kids of all ages. Whether they want to race up the rock wall to see who can ring the bell first, plan a daring escape on the hideaway fold-down table, or take a hammock snooze while listening to some tunes, there’s always a new adventure that awaits.

“Buckaroo Mountain was probably the most fun we’ve had building these playhouses," said Jeff Kindig, vice president, AMX marketing strategy. "For this one, we tried to think up how many different adventures we could pack into a single space. We also got to throw in a bunch of cool extras this year, but knowing how much the proceeds will benefit so many great kids in need is what really makes building the house fun.”

To ensure the adventures never stop, this year’s dual-level design features a downstairs clubhouse with in-wall hideaway table, a Castaways Hammock and an integrated JBL sound system featuring dual 6 ½” JBL marine loudspeakers and a 160-watt JBL marine amplifier with a 3.5mm stereo input to support any mobile device. The upstairs porch includes an open-air deck with integrated rock climbing wall, winner’s bell and a beam and hook to hold the included Lifetime Products Kayak with custom seat and paddle.