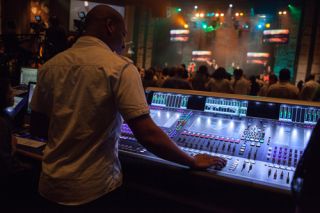 The initial challenges that prompted the upgrade were multi-fold, says Kevin Entrenkin, Director of Engineering for Clark. Over the years the integration solutions company based in Dallas and Atlanta has helped VWC update their technology needs including building a broadcast video suite in 2009, upgrading the PA to full Meyer system in 2010 and adding a Webcast Studio and console in 2011. In 2013, Entrenkin and VWC’s Technical Director Nathan Williams laid out a plan to update VWCs main auditorium consoles, securing a DiGiCo SD7 at FOH, a DiGiCo SD5 at monitors and another SD5 in its Webcast Studio—144 Inputs and 112 Outputs over the entire system—with local DiGiCo SD Racks at each location. Two additional SD Racks were added on stage to handle the I/O for stage inputs including wireless Mics, and In-Ear Monitor Systems. All of the consoles are running on a dedicated Optocore ring implemented specifically for the consoles.

“The long and short of the PA renovation was that everything in the facility was original to the building and beginning to show signs of wear and tear. The existing system was less than 10 years old but the original digital consoles, and cabling, were beginning to need a major overhaul to keep functioning. Aside from the maintenance issues, the overall programming needs in the facility had changed and they needed more channels and mainly, flexibility to keep up with the multiple weekend services, outside events—all with their own slightly different style. The largest challenge was the upgrade to existing cabling and getting a reliable infrastructure to eliminate some of the emergency troubleshooting and failures. The cabling in the facility had served the church well over the years but again everything was in need of repair. Also, between the FOH, Monitor, and Webcast studio, there was a hybrid or a digital split for FOH and Monitors and an analog split for Webcast. The Webcast studio took up half the channel count so there was yet another patching system to pick off the channels needed on a week-to-week basis. The fiber backbone provided the flexibility, redundancy and reliable infrastructure needed to meet their needs and DiGiCo offered a solution that was robust yet easy to use and resolved many of the issues.”

Entrenkin’s decision to go with an all-DiGiCo system was based on the product’s overall feature-set, sonics and price point.

“Having installed three other systems, building from a single console to a multi-console solution,—including Oklahoma City’s Crossings Community Church—the reputation of DiGiCo was easy to put our faith in and take to the client. The executive staff wanted a solution that fits their needs, and they could trust to take them to the next level from a technology standpoint. We felt DiGiCo had the solution to meet all of the needs with room to grow. They had already been on multiple platforms between the three desks and getting consistency for the staff was a big win. Sonic quality was also a big key in this decision. Channel count was an issue in the past and limited us on both inputs and outputs. Now with this system configuration, that was no longer an issue, with room for future expansion for years to come.”

Because VWC offered a diversity of events from small to large and from week to week they needed a system that was flexible. “We have a lot of diversity to our programming over the course of the week and within the last few years there have been a lot of variables that have occurred contributing to its growth. The main one is the addition of Montell Jordan. He came on staff about two years ago and is now our lead worship pastor. When he came on a lot of people wanted to find out what was going on so there was huge growth at that point. Our services feature different types of genres of music—from story-based ballads and Gospel, all the way to rock. We kind of lean to more of the contemporary Christian rock side of things, which is unusual with Montell, but he brings a different type of edge to it, so it’s really neat. That’s on Saturday and Sunday. Throughout the week, we have College and Career on Wednesdays, which has its own band and on Thursdays and Fridays, we have men’s events, as well other special events coming up. We even had aerialists doing a Cirque du Soleil-type of performance for our women’s conference, and with the cues and things like that alone, we had over 35 snapshots. So it was a bit more complex compared to say a traditional Easter service. In most of our services, we have music incorporated throughout, with our Pastor and Montell adding their message to the service. Being able to call up the different microphones and cues with the DiGiCos made it less stressful and we’ve had top-notch sound at every service. Montel has seen everything from being on the road and he’s had nothing but great things to say about it.”

On average from week to week, FOH is racking up around 90 I/Os, including approximately 10 channels of tracks and keyboards each and 20 for drums. Additionally, they’re using a combination of in-ears, lavalieres and regular mics with a total of 24 channels for stereo in-ears.

“Dealing with multiple outputs to different recording devices,” says Williams, who handles FOH for most of the weekend services, “we have a separate mix going to streaming and one going to the satellite campus that’s 25 miles away. From FOH I’m able to send different stems for drums and other instruments that I’m able to send to any console, and they’re able to pick off any mix that I have. That’s been a neat little thing that the band likes, too. They’re able to take my FOH mix and put that in their ears, instead of relying solely on the monitor engineer. They’re not able to actually do their own mixes, per se, but the monitor engineer can call up their mix a lot quicker on his desk using the macros and such so they have options of how they can get a mix that they like. Just within the first week we started implementing this, the band all commented that they noticed a huge change in quality in their ears— tonally and sonically—which has always been a big concern to us: how to improve their in-ear mix.

“The first thing I noticed was the detail and resolution that was present on audio tracks that I have played a thousand times on various systems,” recalls Crippen. “I made the comment, ‘that hi-hat is literally IN the PA box!’”

VWC’s burgeoning broadcast facility has gained a boon from the new gear, as well. “We now have easier control over the outputs going to the satellite campus,” he imparts, “which we’ve just started doing over the past couple of years. We’ve improved our sound quality there exponentially, and it’s impacted our online presence too. On a normal weekend, we probably have about 3,000 people viewing our service online. In the past year, we’ve had a big push to step up the quality of our online game and that’s why we brought in a full-time engineer for broadcast. Working with the SD5, he’s been able to use the snapshots to make a more consistent show for the online viewers, and being able to communicate through the online texting feature in the console has been great. Any immediate changes, we can do it through the console.”

Another critical issue for WVC, as well as for numerous HOW facilities in general, is the training of volunteers—especially at the vital position of FOH. “Having the DiGiCo consoles has made it easier to train on because of their multiple screens and layers. Everybody’s not all hunched over a certain area of the console. We’re able to share the real estate and they can see what’s going on; what another person is doing on another screen. Also, being able to have different shows set up in many different ways has helped us get up and going a lot quicker at rehearsal. There isn’t a whole lot of changing taking place onstage and we’re able to start soundcheck immediately. Every week you know it’s going to be consistent and that’s a huge benefit in maintaining the quality and the sound that the church expects. There is a young lady I trained that got into production last year. She’d never touched a soundboard before and struggled with the previous console, but as soon as she got on the DiGiCo, she was flying. She’s been on staff for probably six months now and can run huge events by herself.”

With the systems integrated fully into the HOW’s regular flow, the feedback was almost instantaneous from their congregation. “When we put the SD7 in at FOH,” Williams recalls “I had people coming up to me in the first couple of weeks asking what we had changed. I heard comments like, ‘the sound is a million times better in here… what has changed?’ And these are untrained, lay people who all noticed the boost in quality.