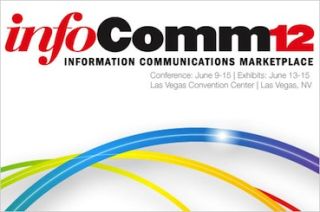 InfoComm would not be InfoComm if it did not present multiple and diverging video projection trends and samplings of new gear. Too many for one article– so I’ll start with the latest technology evolution in the low-mid-lumen range. We’ve been covering the trend toward lamp-free projectors– including news from InfoComm 2012 in Las Vegas last week. While this has been primarily a DLP projection story to date– some rumblings at InfoComm may point to a change in that landscape. And when more projectors go lamp-free, we could see a big uptick in the use of projectors for digital signage and other applications that require low-maintenance, long-form TCO (total cost of ownership) specs.

The projection world is seeing a trend toward “Solid State”, or lamp-free projection– using LED phosphors and/or Laser light as the light source, in place of a conventional mercury lamp. The logic behind all this is straightforward: projection lamps are costly to replace. In schools and universities, or any installation where the unit is in heavy use, many would like to see more “lamp-free” projectors. Currently, LED-light engine and a couple of “hybrid” LED/Laser DLP projectors fill this bill– but the LCD camp is rattling some sabers, too. There is still a price premium in the lumens to price ratio for lampless, but the gap will narrow with economies of scale.

We reported from InfoComm last week, that a handful of companies are now upping the lumen output on lampless projectors for that low-mid lumen level for the boardroom and classroom. Casio, Optoma (both those with the intriguing “hybrid” projectors that combine LED and low-power laser for the light source), BenQ (with a laser light source rather than a traditional mercury lamp), and last week at InfoComm Panasonic entered the arena with another LED-light source projector (but the Panasonic unit is not scheduled to ship before Q1 2013).

At InfoComm last week I had a conversation with Anders Lokke from projectiondesign– who had a booth at the show. I’ve written about “pd” over the years– as the company has always been at the forefront of projection– creating the “porsches of projection” I wrote a few years back, when pd was breaking ground with single-chip DLP projection. I asked Anders why their offering in the “lampless” category, was not pushing the envelope in terms of lumen output. Their FL35 is rated at 1200 lumens. But I looked again at the specs last week, it jumped out at me that their unit is rated for 100,000 hours of light engine life. That’s a huge number. It’s important to note that the other projector manufacturers (listed above) with lampless offerings are talking about in the range of 20,000 hours life. And 20,000 hours is a huge improvement over the life of a mercury lamp! What’s happening is that for that classroom market, they have to get the lumen level up to 2000 and above to compete with so many conventional bulb projectors that come in below $1K for 2-3000 lumens. Experience tells us that getting rid of the heat from LED phosphors in a lampless design is not easy. And laser– it’s still expensive and not easy to eliminate the laser “speckle” in the image. Most of the manufacturers are opting for that 20,000 hours or so of life (when they could be getting even more) to get up to the several thousand lumen range. You can get even more life by dialing back the lumen level a bit as projectiondesign has done. In an ambient light-controlled command and control room, with 24/7 operation for example, the user will take the huge life span over more lumens.

So we’re starting to see both the technical and market dynamics for a couple of market segments– just a couple. High lumen projection? We’ll see Laser light engines there too, but that technology is not to market just yet. That’s a different and even more intriguing story.

And is lampless projection an all-DLP story? Well, so far, it has been, if we’re talking about the low to mid-lumen level of projection (and not the smallest pico projectors). But last week at InfoComm, there was a private demo of a new LCD projector with a “lampless” design (from a big player in the AV world). So the LCD camp is apparently wanting to be in the game too. No details on that, yet, as it was indeed a private showing and not ready to even be identified by company. (Also, at InfoComm last week there was a different private demo of a DLP lamp-free projector that was more high res than all the others out there in the below $2K range– again, no details, as it was a non-public demo of a prototype).

2012 should see more developments in lampless projection, and heat up the race to bring more versatility to the display world.