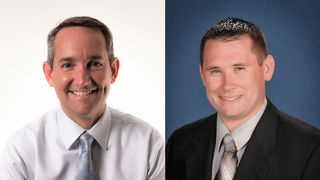 Atlona has named Alan Davies and Jaz Wray regional commercial product sales managers for southern regions of the United States. Davies is based in Dallas and oversees sales in Texas, Oklahoma, Louisiana, and Arkansas, while Wray is based in Southern California and manages the Southwestern U.S. region. Both report to Amelia Vrabel, Atlona’s national commercial sales manager.

Davies has worked in the technology and AV industries for over 16 years, most recently serving as regional sales manager at AVI Systems in Dallas. Wray brings 21 years of telecommunications and AV experience, previously working at Ross Video as regional sales manager for the Southern California region. Both will focus on expanding brand awareness and introducing the latest Atlona products to commercial and residential markets within their territories.

“Alan and Jaz are both industry veterans with extensive pro AV experience and connections that will prove valuable and bolster Altona’s commercial sales efforts in these regions,” said Vrabel. “These moves underscore the rapid progress Atlona is making in the marketplace, which is closely tied to our continued commitment to better serve our existing customers, while aggressively growing our business in new channels.”