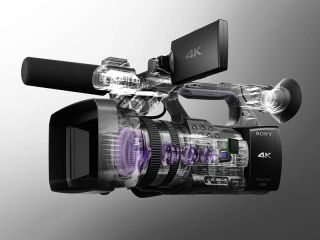 Much of the discussion around the emergence of 4K technology and how it will function in the pro AV space has focused on the subject of content.

Manufacturers have met the challenge of ushering in a new generation of displays, projectors, and switchers to accommodate the new format, but with not much in the way of content to take advantage of this new hardware, many have been asking whether the industry is putting the 4K cart ahead of the content creation horse.

Today, with the announcement of the PXW-Z100 4K camcorder, Sony seeks to alter that dynamic.

As Tatsuro Kurachi, Sony’s director of product marketing and management for professional solutions of America, put it at a demonstration held last week at Sony’s New York headquarters, the PXW-Z100 is Sony’s attempt to demonstrate that “4K content creation is not limited to Hollywood film.”

It’s a pro-grade 4K camcorder through and through, with a form factor that anyone that has shot in HD will be familiar with immediately—it even connects to your TV with an HDMI cable.

However, the most fascinating and important spec on this camera is the price.

Sony expects it to retail for less than $6,500—less than even some standard HD cameras on the market today. That means that if anyone is currently in the market for a pro HD camera, even if they have no other existing 4K infrastructure, they’d be silly not to consider the PXW-Z100.

Sony sees endless uses for 4K in the B2B space and genuinely wants the format to take off. While the potential benefit to Sony of a 4K explosion is undeniable, the case for 4K in a variety of pro AV standby verticals is very sound.

With the PXW-Z100 specifically, Sony sees exciting applications in surveillance and medical research, both of which will benefit from the ability to zoom in on incredibly small fields with previously unseen clarity. The camera can be upgraded to PTZ with a third-party casing which, when combined with the ability to control via Wi-Fi, makes it a particularly compelling surveillance buy.

Other more common application include houses of worship—which Sony believes are ready for the immersive experience that theaters and movies already enjoy—and also simulation, planetariums, museums, education, and digital signage.

Sony is bringing content creation for all of those verticals to the masses.

It’s beyond apparent that 4K, unlike the slow to catch on 3D, is not a trend— it’s an obvious and inevitable format upgrade that we are in the midst of witnessing. On the pro side, the two largest barriers to entry at this point—other than price—are on the content and playback sides. Content has to be easier and cheaper to create, and a standard format and playback mechanism needs to take hold. With the PXW-Z100, Sony is taking a credible stab at equalizing half of that equation.

If successful, this could signal a shot in the arm to many levels of the pro AV food chain. The sooner 4K goes from novelty to de rigueur, the sooner we’ll see upgrade requests flowing in, and the sooner applications for the format beyond what we can already predict will start to materialize.