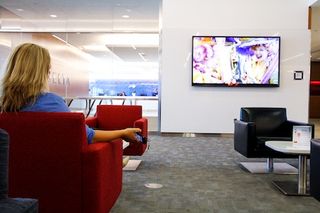 Just like almost everyone who attended InfoComm 2013, I left the show with a bunch of questions about 4K. I was caught off guard by the number of 4K displays and distribution technologies populating the show floor, but the real head-scratcher came after my visit to the Alcorn McBride booth. The company was showing off its truly spectacular Carbon 4K 60fps video player. And what were they demoing it with? A video of some guy with his shirt off juggling a set of devil sticks in slow-mo at a hippie carnival. The content didn’t match the technology at all. It didn’t add up! And so I was left wondering whether now is really the right time for 4K to take off, what 4K taking off would actually look like, and whether all these manufacturers are putting the technology cart before the content horse.

Serendipitously, an email landed in my box the next day inviting me to chat with Leonard Wong, the vice president of technology at RMG Networks.

RMG is a publicly traded digital signage technology company which owns, operates, designs, and manages its own technology platform that runs its advertising media network—essentially, a media company that owns and operates a digital signage network. It is currently in the process of rolling out a 4K digital signage network in airport lounges across the country, starting with the Delta Sky Club at the new Terminal 4 at JFK International, and then LAX, Atlanta’s Hartsfield-Jackson, Boston’s Logan, Ronald Reagan in Washington, D.C., and San Diego International by August 1—an ambitious timeline.

Wong has been involved in the technology evolution at the company, and understands digital signage from the content, hardware, software, and management perspectives.

After our interview, I can attest to one fact—he is a 4K expert.

You’re starting to use 4K in your digital signage installs. Is this just where the technology is heading? Or have there been requests for it from your customers?

Well, it's two things. One, we feel that it's a very good time for us to begin exploring this technology. 4K is going to help on the media side to create a wow factor for reaching an audience. It's much more impressive to look at on large format screens. We wanted to change some of the experience with digital signage. We recognize that there is a proven model for digital signage today, but we wanted to take it to the next level. So we looked at large format screens and one of the things we looked at were video walls and other kinds of technologies.

When it came down to the question of doing a video wall versus a large format, we decided that we should really take a look at 4K content because this is an opportunity to bring something that is new and unique to the market.

We had the location, the venue, the footprint, the relationship, and the intelligence in house—the people who really know how to do this. And so all those factors came together, and we decided to build the 4K network.

Do you feel that you're ahead of the curve on 4K and digital signage?

Yes and no. If I didn't know about a single 4K screen, it really is just a 2x2 video wall solution. So in terms of that property it is relatively the same. The difference is that you take into consideration pixel perfect on a 2x2 where you get 4K, or do you go with a straight 4K screen. In that respect we're leveraging some of the existing technology that's out there today.

However, what are you going to display on that 4K screen to really drive attraction to it? We feel like there is opportunity for growth in content providers, and we fell we have a good hold on it and how we want to speak to our audience and make sure the media side of it is effective and communicating the right thing to the right audience.

We're trying to use 4K to drive a different digital signage experience. The way we've sold this product to our partners is as more of a digital wallpaper. Digital signage is about the customer experience—what they're seeing, what they're feeling, what they're emotions are—is what digital signage needs to entail. Our launch of this 4K network really was to help our airline partners drive a different experience in their lounge. We wanted content that was rich and engaging and showed things that were more artistic. While you can do these things on standard HD screens, it just looks so much better on 4K.

We're not trying to use high-motion video or high refresh rates for video, just because content for 4K video is still maturing. What we're using 4K for is really just an incredibly high-definition picture. If you think about it in those terms, your iPhone camera can take 4K pictures on it. It takes ultra-high-definition pictures, you just don't have a high enough pixel density to show it. The technology to do these things does exist today to capture it—video is just a lot more complicated. Eight megapixel photos are more pixels than you will ever need.

In terms of the technology it's not that much different. It does definitely take more computing power, and you may have to think about what you're working with to really build that foundation for it. But there are definitely two different parts to it. For video, if you do want to capture 4K video that does obviously require a 4K camera. In terms of once you actually have the content, processing it is not that much of a different workload. The tools that you would use today for digital signage apply to the same realm of 4K content. What previously was a 1920x1080 canvas is now just four times that, so now you're dealing with 3840x2160.

So there hasn't been much of a learning curve for the people making this jump on the content side?

There are some computational powers and some additional computational overhead to process it and store it and do things with it, but in the process of workflow of creating the content, they aren't having to re-learn their industry. They are using the same programs that they were previously.

Is 4K something to be feared or embraced?

I don't know if everyone really understands what 4K is. They hear a word like 4K, and they hear words like large bandwidth and all these different changes. Yes, it is large bandwidth, but if you take a step back and look at the overall picture of what 4K is, it's not that dramatically different. It's sort of like a garden hose, for lack of a better term. In your normal video world, you look at a garden hose, and there's a certain amount of water that's able to go through it. Imagine that water is what your video content is. So for 4K, the amount of data content coming through is just four times as much.