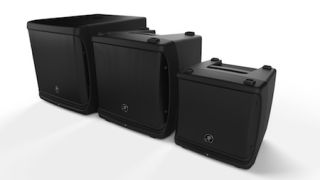 The Seattle music scene reached its peak when some daring musicians decided to twist an existing sound into a new shape. That it would open up an entirely new attitude toward music, making “alternative” the norm, was not immediately apparent. But from the start, Nirvana’s startling new package for the same old sounds woke up an audience with something they didn’t know they wanted.

Two decades later, plaid shirts are back in vogue and Seattle once again is home to a new shape of sound. This week, an audio brand as scrappy and iconoclastic as the northwestern city with which it is associated dug into its heritage and produced a genre-bending rock product.

Woodinville, Washington-based Mackie, riding the wave of buzz associated with the sparkling new iPad-centric DL1608 mixer launched at NAMM this past January and shipping this month, put a show of northwest force behind the launch of a complementary line of powered speakers with built-in DSP and mixing capabilities this week.

Mackie's new DLM series includes two full-range models, the DLM8 8-inch and the DLM12 12-inch, along with the DLM12S high-output compact subwoofer.
The story of Mackie is just like a rock band. It started out small, got really famous, signed on with a big venture capital company that also owns EAW and Martin Audio, and then had a bit of an identity crisis about selling out. Now it’s on a comeback tour of in-house innovation, declares Alex Nelson, president and general manager of Mackie’s parent company, LOUD Technologies Music Gear Group. “We don’t do many of our product launches this way, we usually announce product at trade shows,” he said on stage at Neumo’s. “So when we bring you all up here, we hope it’s for a good reason.”

Indicating how the “powerful, deceptively compact” DLM units carry on in the tradition of the slim yet quite capable DL1608 mixer, Nelson noted, “That kind of innovation empowers musicians and sound people.”

With audio veteran Mark Graham at the helm as CEO for the past two years, Mackie is getting back into the business of commercial audio and install. “It’s good to have him on board,” said SVP of product and market development John Boudreau. “Mackie has kind of a rock ‘n’ roll mentality, and he keeps us grounded.” Throughout the year-and-a-half product development process, Graham continually asked Boudreau about fly points and mounting hardware for the new DLM Series, all of which were incorporated to make the product amenable for installation.

Actually, the DLM owes some of its origins to commercial audio. It was a conversation with EAW president Jeff Rocha which made Boudreau realize that the smaller, better-sounding drivers that EAW was working on “were portable PA gold.” Thus, TruSource was born. Mackie's TruSource driver incorporates a high-output woofer and 1.75-inch compression driver into a compact common-magnet coaxial design.

Few would question the rock ‘n’ roll cred of Boudreau, who startled the commercial audio world with his youth when he launched his first Mackie console (the TT24) shortly after joining the company’s product development department 12 years ago. Today he’s thinking like a big brand manager should, with plans to incorporate some of the technologies developed for DLM into other branches of Mackie’s speaker range. “Getting the first one done is always huge,” he said. “Now I’ve got three years of product extension ahead.”

Boudreau and many other Mackie-ites present at the launch were clearly inspired by the new wave of energy at Mackie. As Boudreau put it, “We’re a smaller company, but we do a lot with a small number of people. You feel the need to innovate with you’re a smaller company.”

Mackie has brought some manufacturing back in house with the Ampeg Heritage series of bass amps, and under Graham’s guidance the company has improved its Chinese manufacturing operations. The DL1608 is manufactured in Mexico.

The fact that the DLM is so compact is no accident, of course. When Boudreau and his team set out to develop the product, size was the variable foremost in mind. But the speaker couldn’t just be little. In keeping with the big capabilities of the DL1608, the DLM series had to feature enough DSP to rival rackmount options, and ample Class D amplification to deliver gigantic sound.

“We asked ourselves what else powered speakers lacked, and we said digital mixing and processing,” Boudreau explained. As such, both the DLM8 and DLM12 feature the Mackie DL2 integrated digital mixer, providing a dual-channel mixing solution with channel features like three-band EQ and 16 effects. The system processing includes a multi-band feedback destroyer, six speaker modes, and Smart Protect technology.

Distributors at the launch murmured in approval when Boudreau highlighted the 300ms alignment delay option. And then the real excitement began. Mackie demo’d the speakers with the vocal stylings of one Glen Phillips of Toad the Wet Sprocket fame. Phillips did an acoustic set of his famous tunes while the DLM series unobtrusively supported him.

Mackie’s Seattle roots were made evident after the launch was complete and the team treated guests to a performance by retro rockers Presidents of the United States. The engineers and sales managers crowded the front of the stage, while lead singer Chris Ballew wandered out into the swarm to meet the Mackie exec who was handling front-of-house from an iPad. It was the kinda punk-rock product launch that could only happen here.

Mackie marketing for the DLM Series is all about “The New Shape of Sound”, and you can find out more here, or watch an in-depth feature and technology video here.