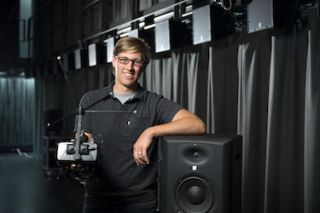 Overtime: Upthegrove modestly applies the moniker musician to describe himself, insisting he’s a much better technician. He finds the creation process interesting, even though he insists the end result isn’t very good. “It’s still rewarding to create something and then release it out to the world.” As the arranging, recording, and mastering [pun-intended] arm of experimental surf rock band Robotmonkeyarm, Upthegrove currently enjoys creating a musical hybrid of analog instruments from the ‘60s and ‘70s with found sound.

Why You Need to Know Him: As a media engineer at Virginia Tech, Upthegrove manages six multimedia labs at Virginia Tech’s Institute for Creativity, Arts, and Technology (ICAT), including the Cube, a first of its kind black box theater and high tech research lab. The Cube specializes in research for spatial sound and virtual reality, yet it is a truly flexible space, essentially limitless in its research potential.

How It All Began: Tinkering and prying electronics open—a familiar stage was set at an early age for this AV career. “I just found my love for audio electronics in my basement taking apart amplifiers and my first Wurlitzer piano,” Upthegrove pinpointed.

Is This The Coolest Job Ever? “The answer is yes,” he stated with all seriousness, before laughing, enviably.

The Cube was but a dream in several people’s minds as ICAT was just getting off the ground. The space existed simply as a black box theater designed for the performing arts side of the Moss Arts Center building. When ICAT emerged into the picture, the idea of the theater being used as an immersive, virtual reality lab came to light. “We could do all kinds of next generation research in here,” he said, imparting a bit of his geeky side by adding, “It’s almost like a holodeck.”

Upthegrove first spent a few years working in Virginia Tech’s classroom audiovisual department before the once in a lifetime project landed at his feet—or perhaps budded organically from the earth beneath him—which he was an integral part in the creation of. That of course was the Cube.

Award Winning Mentorship. That’s one way to get the coolest job ever.

With his early roots, Upthegrove got into live sound and studio recording, which led him to study and later work for Grammy-award winning mastering engineer Bob Katz, “probably the smartest guy I’ve ever met in my life.” The two often spent 10-hour days together, sharing their mutual impulse to dissect audio gear or sometimes listening to mastering sessions in the studio. Katz eventually tasked Upthegrove to build his second mastering studio.

In designing the Cube, Upthegrove worked closely with Arup’s Terence Caulkins and Denis Blount, whom he described as “incredible to work with. They know so much about these sort of big scale systems and how to do it right. We couldn’t have done it without them.”

How He Represents The Future: When not further tinkering with the Cube model he built at home, Upthegrove is also studying spatial sound as a grad student. In doing so, he gets to work on compositions and designing software and architecture for the backend. That’s where he describes his heart is now.

His new passion for spatial sound is the bigger lesson he’s learned working on a first of its kind research facility. “It’s always been here, but after all the research and work that I’ve doing in the Cube, I think this is really the future of sound and sound experience for everybody. We’re starting to see that in all kinds of places,” he said, nodding to the entertainment industry.

How Audio is Just Like Cooking: On a newly purchased 15-acre parcel in Shawsville, VA, Upthegrove and his wife have ample space for gardening and bee keeping. As an avid cook, he employs much of the same process as he does in sound engineering: the chemistry, getting the mix correct, getting the right balance of different flavors. “Ultimately, the audiovisual world comes back to the end user’s experience of whatever they’re being shown or what they’re listening to. So as a cook or an AV contractor or technician, it’s really about what the end user is going to experience and making it as good as possible, whether you’re seasoning something, or mixing something.”