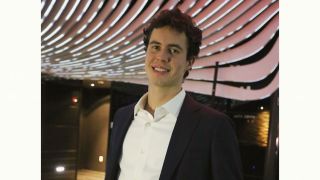 Why You Should Know Him: Before he finished architecture school, Marcelo Gregório had already been working for a major acoustical consultant and started his own woodwork shop in his home of Sao Paulo, Brazil. He gained valuable experience in acoustics, theater planning, and a little bit of AV, and his home recording studio gave him the basics of audio mixing.

Along the way, Gregório formed a clear idea of the type of environment he wanted to apply his talents to. “I like to work for companies that share knowledge, that you can grow and be a little more independent in the things you do in your routine.”
In 2014, he landed in the ideal setting at Arup, where, “people have a lot of freedom to not just work with only one [person], but to be creative and tell their opinion,” he explained. He also cites a lot of trust from managers, adding, “they put hard stuff in your hands, and you just need to figure it out, and then we’re going to review.”

Gregório is now immersed in some of the industry’s most engaging research in VR, paving the future of AV systems design.

What He’s Done Lately: His first full on AV project at Arup was the recently opened Steinway Music Hall, housed in the new flagship retail location on Fifth Avenue in Manhattan. He started just helping with drawings, but he became frustrated that his basic AV knowledge was holding him back.

He detoured from the project for a couple of Extron courses, which culminated in a valuable weeklong training at the company’s Anaheim facility. At the end of this three-month process, he returned to the Steinway project, and “I could understand everything I was doing; all the interfaces, converters, amplifiers, everything,” he enthused. “I was pretty happy with the end result.”

From Steinway, Gregório moved on to work on the acoustic design of Arup’s m|Lab, a mobile environment that combines sound, light, and virtual reality using 3D ambisonic sound and head-mounted displays.