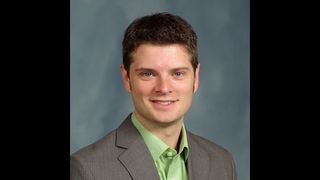 Why You Should Know Him: You might find Bryan Pass’ face gracing the pages of Inc. magazine someday—and you’ll remember seeing him here in SCN first. This go-getter started his career moving tables and chairs on a night shift, and he found that when more help was needed during the day, volunteers were rewarded. He first came to know Advanced AV as a customer, working for Merck, and he really liked the way the technicians and sales people he knew there did business. Ever looking to develop his career further, “They were at the top of my list of places to investigate for a job,” he said. They responded enthusiastically. Almost eight years later, he just finished earning his MBA and is looking to the next phase there.

How He Got to Where He is Now: Starting out in project management, Pass likened himself to a “quasi engineer.” From there, he wanted to be more client facing and grew to do more design and sales engineering, developing into his current role. He took it upon himself to start earning his MBA, a two-year endeavor he accomplished in night classes, mostly because he loves learning. “I love trying to figure out, from a business standpoint, how to make things and processes better,” he said. “But also, I like the entrepreneurial aspect of creating a business and thinking through market conditions and industry and where things fit, and where there are gaps, where there are opportunities.”

Speaking of opportunities, Pass sat down with management at Advanced this past fall to discuss just that. With the company’s somewhat recent acquisitions of Promedia Technology Services and New Era, he’ll be taking on more responsibilities helping to bring those companies together.

How He’s An All Around Team Player: He plays soccer in a men’s league almost year-round, and practices CrossFit. He recently became a father, so that’s newly taken up much of his free time. He exuded that new parent beam on mention that his daughter had just started to laugh. Earlier this year, he participated in a grueling 13-hour adventure hiking with a brick-filled backpack, the Go Ruck Challenge, an endeavor to overcome obstacles and bridge the gap between military and civilian citizens. “It was difficult, but we learned a lot about our own limits and the benefit of teamwork,” he said. “It’s just so applicable to the business world.”