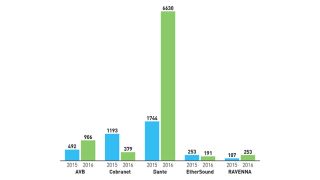 For the second year, readers of SCN and its sister title in Europe Installation, along with publications in the Middle East and Asia, asked readers to complete an online survey about audio networking. With the ability to read year-on-year data, the trends for audio are really starting to appear.

The survey was open to all. In particular we wanted to hear from people that don’t use audio networking technology, and there was a good response from this section of the SCN readership.

Inevitably, though, the majority of responses came from people that already use this technology, so that needs to be taken into consideration when reviewing some of the answers.

The purpose of the survey was to try and find out how much audio networking is going on, and what choices people are making. We kept most of the questions the same as last year but added a couple of important new ones.

In general we were looking at the “big five” industry protocols, as well as seeing how much use there was of proprietary ones.

One of the significant trends is the sheer number of people using audio networking technology. With two years of survey, we now have three years of data.

First of all there is a 5 percent year-on-year decline in the number of people not using audio networking at all. Only 13 percent don’t expect to use it in the next 12 months. More startling is that 69 percent expect it to be more than half their work. Audio networking appears to be the predominant method of audio connectivity in the next 12 months.

We wanted to know about what protocols people plan to use and how many projects they would do using each protocol.

First of all, use of Cobranet has fallen of a cliff, with only 30 percent using it in the last 12 months. AVB use almost doubled and RAVENNA more than doubled, albeit from a much lower starting point. And then the leader for last year, Dante, growing nearly 400 percent to be used on more than three quarters of all networked audio projects.

For the moment it’s Dante’s game to lose.

We wanted to know what would make people switch from one protocol to another. Product choice is the key factor, but reliability and interoperability were important too. Out of the eight possible answers we gave, “based on standards” was sixth. While we like the idea of standards, it seems that just getting the job done reliably is more important.

From their use of different protocols, we asked how easy each one was to use. Dante was the clear leader—the only one with more than 50 percent finding it easy or very easy.

For the non-networkers, we asked them if they had to use the technology, which protocol would they use? Compared to last year, Dante has consolidated its position up from 38 percent to 80 percent. All other protocols showed a decline in interest except RAVENNA.

Are We Really Converging?

This was a new question for this year. We wanted to know whether people were trying to merge networked audio along with other IT services.

As we suspected, around 70 percent of projects are running audio as a separate network. It might be fair to say that most people are not converging; they are just using networking technology.

The question to ask here is why? Why are people not working with the IT teams to put the audio through the building IT network? I think this should be a point of industry discussion.

Are people afraid of trying to put the audio into the IT network? Is it an education issue for IT specialists? Are there technical reasons why it won’t work?

Looking to the Future

Finally, we asked people to peer into their crystal balls and to predict the future for each protocol. People expected AVB to increase a little, Dante to increase a lot, RAVENNA to stay the same, and the others to significantly decrease.

Summary Last year we predicted “a massive predicted increase in use” of digital audio networking. The figures show this to be true, and even with two or three years of figures, we can really start to see the direction things are going in.

Dante leads by every metric. Users want a variety of product, and currently Dante gives people that. Dante user satisfaction is higher, and this is a demonstration that Audinate has simply put more investment into digital audio networking than anyone else. That investment is clearly paying off.

Summing up, this is the year that Cobranet and EtherSound effectively died, and audio networking has overtaken analog as the standard approach for most our respondents’ projects.