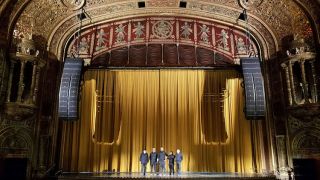 The Palace wasn’t the only thing evolving. The entire neighbor, once regarded as rough-and-tumble, has been gentrifying, pain the way for a renaissance with the Palace as a gem in its crown.“The perception of the Palace is changing, being increasingly regarded as a great concert venue, and by bringing a rider-friendly PA, we’re helping promote that perception,” said DeFilippis.

After this arrival, DeFilippis suggested just that-bring in a rider-friendly PA. He wanted something they could rent to concerts producers, “getting return on that investment and making it easier on the event producers, who wouldn’t have to rent outside systems, and on the building, which wouldn’t have the wear and tear that bringing in rental systems can cause.”

Robert Way, the venue’s COO, was agreed, and the two immediately put together ROI research to consider the upgrade options, and the L-Acoustics equipment was chosen.

The now-installed K2 system solved another issue for the venerable venue. Its massive balcony, divided into an upper and lower loge, and a main balcony, hovers over a huge swatch of the orchestra-level seating.mThe rear sections of both levels were difficult to reach for sound.

K2 and L-Acoustics’ PANFLEX system, a horizontal-steering technology that combines mechanically adjustable fins with DSP algorithms effective from 300 Hz, quickly resolved that issue. Narrowing or widening the horizontal directivity of the adjustable fins can serve many purposes, including, in this case, adapting the throw to fit long- and short-distance coverage/SPL requirements, while also avoiding reflective surfaces.

“Now, we get the sound all the way to the back wall of both levels, clearly and evenly,” says DeFilippis. “And L-Acoustics’ engineer came in and did the tuning in a matter of hours after it was installed. Amazing.”

Rafael Jaimes, principal at Audio Spectrum, said the K2 arrays are well-suited to United Palace’s specific needs: “We used L-Acoustics’ Soundvision modeling program, and its predictions were very accurate—we knew we’d be able to cover the rear seats of the orchestra and balcony areas completely and consistently.”