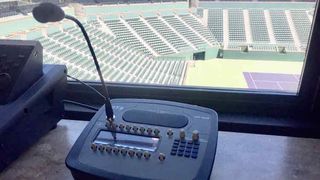 An RTS Dante intercom system delivers communications between the tennis courts and the broadcast and judges’ booths during matches.Indian Wells Tennis Garden (IWTG), located near Palm Springs, CA, is one of the largest tennis complexes in the world with nine stadiums including the world’s third largest-capacity tennis venue. With the goal of achieving high-quality, low-latency audio through its immense compound, the venue has transitioned from an aging CobraNet network to a Dante audio-over-IP network from Audinate. The transition to Dante opens new freedoms in audio routing, distribution and scalability, while reducing the costs and labor associated with system integration and ongoing use.

According to systems integrator Technicomm Industries, it selected Dante for the project due to its wide adoption—more than 370 manufacturers and 1200 Dante-enabled products—and chose hardware from QSC, Symetrix, Shure, and RTS that supported the protocol.

“At IWTG, the reliable interoperability of Dante products enabled us to deploy a very complex audio distribution network much faster and easier than ever before,” said Steve Burgess, project manager, Technicomm Industries. “Dante is a wide-open road in comparison to the extreme limitations and bottlenecks we routinely faced with other networking technologies. The signals flow exactly where we want them to go, and it’s just simpler and more flexible to install and operate. These benefits are of enormous value when working in a facility of this scale.”

Despite the fact that the system required audio to be transported across long distances—several thousand feet in many cases—and the number of venues the network must support needed to scale across the facilities, Dante simplified the deployment. In all, the Dante network crosses 29 tennis courts and many deluxe suites, broadcast booths, press areas, video walls, and restaurants. Beyond the stadiums, the Dante network extends to a massive outdoor parking area to support live paging and pre-recorded announcements.

Burgess and his team migrated the facility’s old systems to two Dante-enabled digital signal processing systems to serve different stadium needs: a Symetrix X12L to serve the broadcast booths in stadiums 1 and 2 and the TV compound; and the Q-SYS Core 3100 from QSC to cover the rest of the facility.

The Symetrix installation was the first phase, which initiated the move away from CobraNet and toward Dante. Once deployed, Dante alleviated the innumerable challenges of moving audio across such long distances.

In all, the Dante network crosses 29 tennis courts and many deluxe suites, broadcast booths, press areas, video walls, and restaurants. “While the installation of CobraNet in stadiums 3 through 9 took a month and a half, it only took a week to roll out the Dante network, even with the addition of stadiums 1 and 2,” Burgess said. “One big timesaver is that I don’t have to put much thought into routing audio over great distances, and to and from multiple points anymore. The flexibility in how we set up and reconfigure the network to transport signals offers great freedom, and the simpler network cabling infrastructure further accelerates rollout while keeping costs down.”

In the second phase, Technicomm chose the Q-SYS Core 3100 DSP upon renovating stadium 1, the 16,100-seat main stadium. This stadium incorporated Dante-enabled Shure microphones and a RTS Dante intercom system to deliver communications between the tennis courts and the broadcast and judges’ booths during matches.

“Dante’s seamless and reliable networking allows one system to talk to the entire grounds, and one person can control the entire system from an iPad,” Burgess said. “And the most important thing is that when I plug Dante-enabled devices into this network, they’re immediately detected and the signal just plays.”

Both Symetrix and Q-SYS provide IWTG with the flexibility to accommodate its anticipated future growth needs, according to Burgess. The current 64-channel network capacity can be expanded to 128 channels and beyond just by adding additional Dante cards.