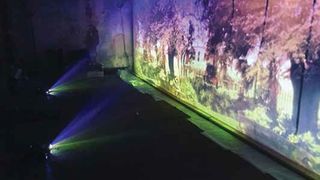 Melissa Ulto is redefining what it means to be a systems integrator.

The NYC-based video designer/creative director and founder of MULTO.com dubs herself a “hybrid,” blending aspects of the creative with the technical in her projects. “Video design entails creating environments where video is an ambient element for any sort of production or retail space; it augments storytelling about an event or a product.”

In the theater, it can replace and enhance traditional sets, said Ulto, who has designed for off-Broadway, immersive theater, popups, and other events. “It’s taken me around the world, although, as with any creative business, it’s feast or famine.”

“When I’m doing a construction-level retail build of an AV system, I’m the systems integrator,” she said. “I go in and evaluate what the client wants versus what technology is available. I contact the manufacturers directly through the B2B systems that allow me to connect to authorized dealers at a pricing level with small markups. I get manufacturer pricing plus that small markup from the authorized dealers.”

Ulto does the site surveys and networking specs for her projects, hiring crews for the physical installs. “Crews don’t always expect me, as a female in the AV world, to know all the protocols; they are often surprised that I do and that I am willing to learn so much more.”

Ulto has created award-winning websites, apps, and video installations for flagship stores for a variety of fashion and media clients including Diesel, Escada, The Kooples, Rag & Bone, HBO, and Samsung.

“I work with a variety of manufacturers, including Brightsign, DynaScan, Novori, Four Winds Interactive, Chief, and Premier Mounts,” she said. “Each client is different and some have legacy systems I have to work around. Some are looking for a solution to an existing digital signage installation.”

MULTO.com is a new breed of integrator that brings to bear not just the technical chops to design and implement projects, but also a unique, creative vision that makes it possible to engage viewers like never before, said Jeff Hastings, CEO, BrightSign. “We continue to be impressed by Melissa Ulto’s innovative use of new BrightSign features, such as projection mapping, to create immersive AV experiences that conjure strong emotions and leave a lasting impression.”

Ulto’s trajectory began when she discovered photography and video during her high school years in northern Ontario, CA. “Even then, my goal was to marry those productions and the internet,” she said. “In my mid-20s, I worked at MTV and then at about.com, where I got a real taste of WebTV technology.”

In 2001, Ulto’s talent for creating short-form videos and her knowledge of HTML snagged her a senior digital video specialist position at the Columbia Center for New Media, a teaching and learning grant program at Columbia University. “What we did there—a lot of online short video documentary format, interactive content, quizzes, and self-evaluation tools, covering a variety of topics—is ubiquitous now,” she said. “What we were doing at the academic level is how portals and sites now function; academia leads the way. We did live streaming for conferences before it became a mainstream offering at every major event in culture and sports.”

Empowered, Ulto became a consultant, founding her own company in 2003, and working in-house for brands and agencies. “I remember doing video installs for Diesel using nine screens of video walls with ceiling projection,” she said. “We did an interactive idea booth for their Jogg Jeans campaign, allowing for user-generated content and an in-store contest. We also did a holographic projection unit for that same campaign. It looked incredible!”

Ulto, who had become a VJ, did live video projection and live mixing of video content for Blondie, the Ramones, Busta Rhymes, and the Psychedelic Furs. “The Furs, in particular, were clear about each song featuring a different color, and I created the animations myself. It was my job as the in-house VJ to make sure every concert and every event looked visually stunning while staying on brand with the client’s look/feel.”

With digital signage coming into the forefront, she entertained more and more ideas about exciting content possibilities, the eye candy for retail. “The ability to use data analytics, cameras, facial recognition, IoT sensors, and user-generated content models represents huge growth in personalized video marketing,” Ulto said. “Apple’s facial recognition is about three years or more behind what is being done in digital signage.”

Currently, Ulto is working on digital projects for some emerging brands, and is looking forward to doing more immersive theater video design work in the future.

“In the last five years, a lot of AV projects have featured IoT in the form of sensors for temperature, pressure, motion, and sound, as well as cameras to collect data. This is a way for retail and restaurant clients to create more than a passive experience for customers. They can assess behavior in front of the video screen,” Ulto said.

Examples are the video booths and cameras with motion sensors she created for Diesel flagship stores. “After customers tried on jeans, they could take a video of themselves for social media and might win a pair of jeans,” she said. “This allowed Diesel to collect content in a quality-controlled environment and gave it a repository of content for its social media campaign without the need to hire professional models. And customers could feel a part of Diesel’s social media presentations.”

What’s in store for the future? “One colleague has created a camera data-collection system based on facial recognition to figure out what kind of information to put on a video screen for retail customers and what types of emails to send them,” Ulto said. “Another trend, already here, is for more solar-powered kiosks, which have lower environmental footprints.”

There is plenty of potential in digital signage and in projection mapping for corporate, government, education, and hospitality, she said. “It’s important that AV integrators not be afraid to hire subs to reach out to other tech companies. A lot of potential clients are looking for great technology, content, and installs, and this desire represents a good capital spend for a number of years to come.”