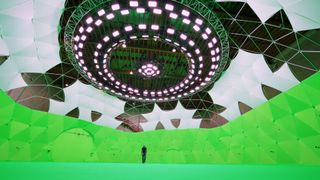 On a studio lot just a mile down the road from Los Angeles International Airport sits an unassuming building that may signal the future of high-tech moviemaking. Inside the new Intel Studios structure is the world’s largest immersive media hub. It’s a 10,000-square-foot-geodesic dome outfitted with 96 high-resolution 5K cameras. The dome is more than 44 feet high, about four stories.

Moviemakers can film scenes inside the canvas dome from all directions at once, a technique called “volumetric capture”. It allows musical performers, Hollywood directors, even top athletes to tell stories in magical new ways. Intel’s technology creates voxels (think 3D pixels), which render the virtual environment in spectacular, multi-perspective 3D. It allows audiences to view a scene from any angle—even the middle of the action.

Intel Studios sends captured volumetric content over 5 miles of fiber-optic cable to more than 90 Intel-powered servers that can crunch over 1 terabyte of data every 10 seconds; it takes almost 1,500 CDs to hold 1TB of information. The studio’s servers will eventually store up to 10 Petabytes of data—the equivalent of 133 years of high-definition video.

Intel Studios is currently working on two Hollywood virtual reality productions to be released in early 2019.